Book Review - India Was One 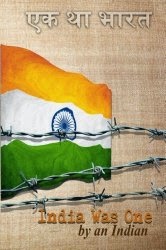 Book: India Was One
Author: An Indian (Anonymous)
Genre: Fiction

The book starts with the protagonist, Jai going through a lonely, dark, jungle kind of slightly-eerie place with a local guy. Once they reach a certain spot, Jai looks through binoculars, across a border at his wife. The two cannot cross the border - the border dividing North and South India.

After a glimpse of this emotionally-charged, tense moment, the story goes into flashback and starts from the college days of Jai and Kaahi (Kahaani's nickname).

Is Kahaani really a name, I wondered. So I googled it - it apparently is, but not a very common one. I had heard of 'Kavita' (means 'Poetry'), but never ,Kahaani' (means 'Story'). Surprisingly, no one in the book asks Kahaani about her name.

Jai's family is from Karnataka, and Kaahi's from Gujarat, though both the families stay in Mumbai.
I hail from North India. My first thought was - well, Gujarat is not in the North of India. But from the point of view of dividing the country into North and South, it is in the northern part of India.
Also, I had expected some major lifestyle differences in the two families. Since both the families stay in Mumbai, that expectation didn't hold good either.

Jai has three friends - Sikh, Tamil and Bengali... India, after all, is one. Even many other communities find a place in the story. All living in harmony... mostly. The friends are mostly stereotypical examples of their community or religion.

Jai is the hero, and is portrayed as one. His father is rich. As I read along, I realized he's filthy rich. Uh Huh, really loaded with money.

The book has two fonts - Normal and Italics.
The normal font tells you the story.
The italicized font is explanatory lessons/lectures about India, its diversity, different cultures, cricket, bollywood, etc.
Once the story moves to America, the italics start with details of American lifestyle, many things that an Indian would find strange there, the weather, etc.

But certain things can't be explained. Can you explain the impact the impact of a Gabbar Singh dialogue to one who's never watched, or even heard of, Sholay?

So the book is a fiction, a travelogue, and a self-help book for expats in India and America. Even the difference in the education system of the two places is explained.
The author has chosen to stay anonymous. The book does seem to have strong autobiographical inspiration, though.

The book is written in the English that most Indians speak. It is spoken English on paper. So sentences, such as 'Jai's feelings for Kaahi were mutual, not just a one-way street' can be found in this book.
I personally don't mind reading such sentences once in a while, but one gains nothing. A good story, written well, is an enriching experience.

Hindi script is used for certain words and phrases, which are then transliterated and translated.
If one understands Hindi, it does add to the way one can relate to a certain situation, in a couple of places in the book. But mostly the translation works almost as well.

The main sore point for me in this book has been Kaahi's character.
She is introduced as a smart girl, with a mind of her own. But as the story proceeds, I feel only Jai thinks that. Because her actions speak otherwise.
She has no ambition, is conveniently fond of cooking and is rather timid. She can't even keep track of the take-off time of her flight, it seems.
There is an instance in the book, when Jai is discussing that Kaahi is bored. I was like, 'Finally!' Instead the two of them take yet another vacation, giving us another travelogue. She doesn't even have any friends of her own. Jai's friends become her friends and all is hunky dory.

A quote from 'India Was One' -


I had expected an intense story of India dividing and a couple stuck across the border, pining for each other.
I found instead a book that is good for one-time light reading, with lots of information about life in India and America.