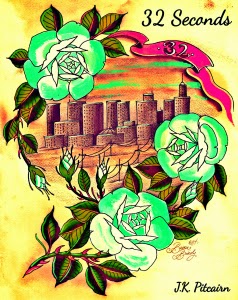 Johanna K. Pitcairn's 32 Seconds is the story of quick-tempered seventeen year old, Julie Jones.
Julie is a girl, who seems to 'have it all' at the first glance. The first impression may see her as a pampered daughter of a rich father.

'Call me stupid. I preferred "willfull"'
These are Julie's thoughts.

As 32 Seconds opens, it seems to be a story of a 'Poor rich girl'.
As the story unfolds further, it reveals itself to be the journey through the maze of past and present, as Julie comes to terms with her real-self.

As the surface is scratched on Julie's persona, what is unveiled is the actual Julie that no one seems to have known. Her insecurities, addictions and secrets have all been cloaked by the mask of comparative normalcy. Cloaked, not just for others, but at times for Julie herself too.

Julie is lead on a path of self-discovery and self-acceptance when she comes across an old woman, The Mighty Listener,

The metaphors used in the narrative of 32 Seconds are extensive, inventive and impressive. They are interesting, amusing and at times, exasperating. One thing they are not is common or boring.
I felt that in a couple of instances, the metaphors used didn't gel effortlessly with the smooth flow of the story. But they were fleeting thoughts, soon irrelevant behind the gripping storytelling of Johanna Pitcairn.

The characters are introduced in a very unusual manner. Symbolism plays a salient role in Julie's discovery of herself and her struggle with herself.

The story of Julie Jones is more relatable, because it could easily be the plight of any teenager.
'Your mental obsession is driving you further into depression and to the brink of insanity. Running away doesn't take away the pain, or your loneliness. You always feel like you don't belong anywhere...'

32 Seconds could easily have been preachy. It is not.
32 Seconds is not always entertaining, but it is interesting. Not easy to read in entirety, but one gets lost in the maze of 'Underworld'. Not a compulsive page turner, but once you begin it grows on you.

There's hope in 32 Seconds, despite the darkness. There is glowing light at the end of the tunnel.

(The text in italics are quotes from the book)

This Review is part of The Book Review Tour.
I was given a free copy of the book in return for an honest review.

To the average onlooker, the city of Los Angeles represents glitz, glamour, and the celebrity lifestyle. But to seventeen-year-old Julie Jones, the city is a vast host of problems she’s longing to get away from. The latest? An unfortunate disagreement with her ex-boyfriend Mark—one that could land her in some serious hot water.

So rather than face the troubles that torment her, Julie decides to run away from her old life and start fresh somewhere new. But her parents aren’t on board with the plan, and she soon finds her bank accounts frozen and her wallet empty.

With just seventy-five dollars and a full tank of gas, the troubled teen is far too stubborn to turn around and head home. So what’s a girl to do?

What Julie doesn’t know is that her travels are about to take her somewhere unexpected—a place where she’ll be forced to come face to face with the ghosts of her past in order to secure her future.

A tale of redemption, hope, and freedom lost and found, 32 Seconds is a thought-provoking exploration into the human spirit and the nature of forgiveness.

Johanna K. Pitcairn has dreamed of becoming a writer since childhood--authoring her first novel at the age of nine, and countless poems, stories, and screenplays by the age of seventeen. Later, rather than pursuing a career as a director and screenwriter, she decided to go to law school, driven by her father's opinion that "writing does not pay the bills."


Ten years later, she moved to New York City, which inspired her to go back to the excitement, wonder, and constant change of being a writer. Pitcairn is a huge fan of psychological-thriller novels and movies, and delves into her hopes, fears, friends, enemies, and everything in between in her own writing.