August 18, 2015
August 15, 2015... For once, as my family and I sat listening to Prime Minister's Independence Day speech, there was no special anticipation for the day that stretched in front of us. Usually our National Holidays are planned well in advance - picnic, visiting friends, barbeque in sun (that has to be 26th January obviously) and much more.

This Independence Day dawned with no special plans. The morning tea was an unusually leisurely affair that day. Boredom threatened to set in.

What's for lunch, came the question from my daughter. Thus started the discussion.
Rajma Rice, Poori Aloo, Bread Pakore, Dosa, Noodles - we moved across various cuisines rather effortlessly, but could not decide on anything that everyone would agree on.

I lounged on the sofa, not participating in the discussion, except for when they would come up with an option, which was practically not possible to prepare that day - either due to unavailability of ingredients, or because the dish took a long time to cook.
I find deciding what to cook, almost as much a task as the cooking itself.

Then came the option of Pasta. I liked that idea.
I had a packet of Del Monte Pasta with me, thanks to Del Monte and Indiblogger. I had been procrastinating on it for a couple of weeks and the deadline was approaching.
I gave my Aye to this option.

Which pasta? Another decision to be made.
Red, White, Green Pesto???
We even considered experimenting with a new flavour - Chinese flavoured, with soya sauce, etc. Luckily (or may be not) we gave up on the last idea. May be some other day though.

Why not all three, came the suggestion from my son. The previous year, on Independence day, we had tried tricolour Pooris, and everyone had loved them.

How about Tricolored Pasta this year?

Four nods and the menu was set for the day.

Would it spoil the suspense if I reveal the end results first? I think not. And I just cannot resist sharing them now...

We couldn't think of anything edible in blue to make a semblance of ashoka chakra in the centre. Any suggestions for the same are welcome. Do mention them in the comments below.

Anyway we did try to make one with green but gave up on the idea. Here's a capture of the effort though.

Okay, back to the beginning now.

The start of this was the Pasta that I received. Thanks Indiblogger and Del Monte!

To the Penne sent to me, I added Spirali too. At my home, everyone loves at least two types of Pastas mixed together. I do wonder if it is the 'right' thing to do.
The fact that we like it this way does make it right for us, I think.

So I started with the red sauce. Here's how I made it.

Peel them. Keep a couple of them aside to coarsely chop and add later. Puree the rest of the blanched tomatoes.

In a pan, heat a little oil and add the pureed tomatoes. Cook for about 2 minutes.

Then add the coarsely chopped tomatoes and a couple to teaspoons of readymade tomato puree. (This puree gives a bright colour to the pasta sauce and also gives it a tangier flavor).

Add salt, black pepper and oreganos, and let it simmer for 2-3 minutes.

Add finely chopped basil leaves.
(Although I always add basil leaves to the red pasta sauce I make, this once I seriously considered omitting it, because I was aiming for three distinct colours. In the end I did add it. The basil leaves are not visible in the red sauce but add to the flavour and texture)

For the white sauce, heat a little butter and olive oil in a pan.

Add garlic and then onion. Saute a little.

Cook for a couple of minutes, before adding milk. Let the milk boil. Add salt and black pepper. Add cream and remove the sauce from heat as soon as it starts boiling.

Churn all the ingredients in the grinder and the sauce for the green pasta is ready.

The pasta is boiled, the sauces ready and the vegetable chopped...

For the red pasta, I decided to add finely chopped carrot and red pepper.

Since I had already added mushrooms and corn in the white sauce, there was no need to add any more vegetables.

For the green pasta, I had chopped spinach and blanched brocolli ready.

Heat oil in a pan. Add carrot and red pepper and saute for about 1 minute.


Add the boiled Pasta. Pour the sauce of on it. Mix properly.

Method:
In a pan, take the boiled pasta and add the white sauce to it.

Add grated cheese, mix and cook for a minute.

Heat oil in a pan. Add spinach and brocolli. Saute for 1 minute.

The three pastas and ready to be plated.

Once the three pastas were ready, I sat back and enjoyed watching everyone else arranging the three colours in the bowl.

Here are the results. Once again :)

Once the pictures were clicked of the pasta with three distinct colours showing, I did grate some cheese on it, heated it in the microwave, poured some juice in a glass...

And as Italians would say - 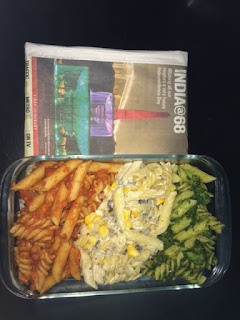