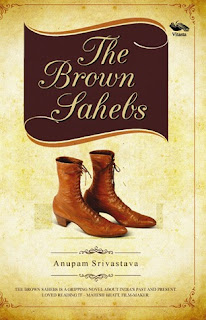 THE BROWN SAHEBS
BY
ANUPAM SRIVASTAVA

The mysterious Ekant Baba - the Solitude-loving Sage of Varanasi passes away and leaves behind papers. This is the beginning of the intense, gripping and disturbing story of 'The Brown Sahebs'.

'The Brown Sahebs' begins in Varanasi. As the author describes Varanasi through first person narrative of Ekant Baba, my first impression was that the book is written by one who knows the city thoroughly and loves it.

As the story continues, to the kingdom of Teekra in pre-independence India, through the freedom struggle in other cities, and beyond, the words seize your imagination.

I have loved reading every single word of 'The Brown Sahebs'.
I am not exceptionally fond of reading about history or politics. I usually just skim over the write-ups on such subjects.
This book is not verbose on these subjects, but still manages to be meticulous and riveting.

'The Brown Sahebs' is a multi-layered story.
It is like reading the history of India, told by one who has keen understanding of the subject and an unerring expression.
Besides being a stark portrait of India's past and present, it also has timeless love stories, gross harsh realities, and soothing spiritual guidance.

"We have a path. Each one of us has a path but it takes a great deal of courage to find it and to tread it. That... is the greatest asceticism."

The words are beautifully, at times poetically, written. Words of profound thoughts and beliefs.

When I am reading a book, I like to mark the parts that I find interesting. Now, it helps in writing the review, yes. But I have always done it.
While reading 'The Brown Sahebs' I was spoilt for choice. There are lines worth quoting and philosophies that deserve to be pondered upon. There are phrases that make reading a pleasure and descriptions that create visions.

'The Brown Sahebs' puts things in prespective. There are so many details that are lost when we look at history later, from a distant point of view. We become immune to the brutalities of our surroundings.

There is so much that was true for India long back, and sadly is true even now. It could be a depressing takeaway from 'The Brown Sahebs'. But it leaves me hopeful. And meditative.

"The change one brings about with one's actions is most often so small and gradual that it is invisible. But it is there all the same."

Anupam Srivastava's 'The Brown Sahebs' is a book that I loved and I highly recommend.

The text in italics are quotes from the book.
Thanks to the book club for sending a copy of the book to me in exchange for writing an honest review.
*  *  *


Blurb
The Raja of Teekra, a dusty and forgotten kingdom near Lucknow, gets lucky when the British Resident visits him but also brings with him a leading revolutionary. The Raja enters India's struggle for freedom and is rewarded with a berth in the cabinet of free India. He is shocked to see the ministers and officers living and operating like their imperial masters but is suitably rewarded for his silence. As he begins to enjoy the good life of Lutyens' Delhi, the British capital which India's freedom fighters abhorred, he faces only one adversary in his plans—his journalist son Pratap. A novel that will blow you away with its depiction of love, passion, intrigue and betrayal.

Anupam Srivastava was born in Lucknow, India, where his novel, The Brown Saheb's first part is set. However, he never lived there as his father and mother, Ashok and Veena Srivastava, lived in different parts of India. However, Anupam spent some of his childhood and most of his vacations in Lucknow where he flew kites and learnt about the craft of pigeon-flying. He went to a boarding school near Delhi, the Motilal Nehru School of Sports, Rai, where he played cricket but earned his college colours at St Stephen's College, Delhi, in cross-country running. He studied English literature (BA Hons and MA), won the college annual poetry prize while pursuing his MA, and being sure his vocation was writing and journalism, became a journalist with The Times of India in 1993. In 1999, he was awarded the British Chevening scholarship by the British government.

In 1999, he left journalism to work with the United Nations Population Fund in India in communications. Subsequently, Anupam worked with Oxfam India Society, Unicef and other development agencies. The Brown Sahebs is his first novel and tells the story of India not taking off its colonial clothing even as it became a democracy.

Anupam is married to Radhika Srivastava, and they have two children who figure in his children's novel, A Family Secret.