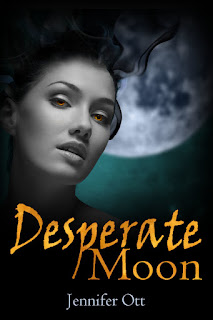 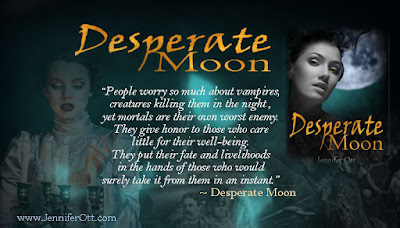 Golden, melting, seductive eyes gaze out from the cover of 'Desperate Moon'. They don't look desperate.
In reality, at times, they are.
They are the eyes of Katerina, the vampire who has seen 600 years of life. She has experienced a myriad of emotions, not just of her own, but also of the humans whom she feeds on.

"With each person's blood you take, they become a part of you - your past and your future. I am not just one life. I am the lives of thousands I have tasted."

Desperate Moon is the story of an immortal who has chosen to live amongst humans. And struggles to blend in.

"People choose whom to despise and disperse rumors about. They make monsters of people in order to pitch propaganda, yet these monsters are real people with their own loves and loyalties."

'Desperate Moon' switches between Katerina's present day and her past experiences. There is a cynicism in her, which is to be expected, because of all she has seen. But there is still a hunger (pun not intended) for more, for love.

Katerina's struggles and her experiences leave behind wisdom which would hold the test of time for one and all.

"One thing I have learned on my travels is to always appear in control no matter how much you fear. It is the perception of courage and power that keeps others at bay. You need to learn to carry yourself with greater power."

As she finds it in Desperate Moon, there is also an analysis of why she is the way she is. A very interesting imagination of the scientific reasons behind Vampirism.

The language of Desperate Moon makes it an easy read.
I found the story is a little too lengthy, detailed and repetitive in places though.

'Desperate Moon' as a title is a reflection of Katerina's pain and loneliness.

"...only lonely, desperate people gaze at the moon as if it holds all the answers to our dreams and possibilities."

'Desperate Moon' is a story of a woman's struggle to fit in, of a Vampire's need to be accepted, a man's acceptance of unnatural with love.
'Desperate Moon' is an intense tale spanning across centuries, which has a lot of pain, but love conquers all.

The text in italics are quotes from the book.Thanks to the PumpUpYourBook for sending a copy of the book to me in exchange for writing an honest review.

Inspiration comes from watching way too much Monty Python. The abstract and the absurd way of looking at normal life, not only offers humor, but questions many problems in society in a light-hearted manner. If we can laugh at ourselves, if we can laugh at life, problems do not seem quite so difficult to tackle.  In fact, problems are not as complicated as they seem; everything is very simple. If you can laugh at it, write about it and read about it, most likely one would think about it.

Author Jennifer Ott has written several satire fiction, Wild Horses, The Tourist and two non-fiction books Love and Handicapping and Ooh Baby Compound Me! She recently published, Serenidipidus and Edge of Civilization. She also is the host of the SuperJenius Internet Radio show on Artist First radio Network.

Jennifer Ott lives in Long Beach, California, enjoys the sun, the sand, the surf and lots of Mexican food.


*  *  *
Book Excerpt:
Siegfried was still awake scouring over his texts when a knock sounded on his door. He checked the clock and grinned—just in time. He closed his books and strolled to the door. Upon opening it, he saw a dark face shrouded under the hood of a large cloak.
“Irena,” he said with a widening smile.
She stepped inside lowering her hood. “Here for my appointment, Doctor,” she said letting her cloak drop to the floor and exposing her nakedness to him.
He had met her during one of his house calls. She offered nanny services to one the elites who lived in the hills surrounding Prague. Siegfried always wondered why such a beautiful girl would give herself up to servitude when she could find a rich husband.
“Servitude would be marrying a rich man,” Irena once said to him, “freedom is being his servant. Mistresses gain a lot more than married women.”
Irena was greedy as such. Siegfried was only too happy to find himself tasty to her, yet he too shared her same philosophy. He offered his service in providing healing and care and once he left their front door, he was again a free man to his own mind and mission.
Not being able to resist the sight of her supple body, he pulled her close and kissed her face.
She pushed him away. “Doctor, you are still dressed.”
With haste, he removed his clothes starting with his pants that constrained him and his shirt which he struggled to remove. She laughed helping him tug the sleeves over his wrists. Once both were naked, he carried her to his bed where he rested her down on the feather mattress.


He lowered his face between the plump yet firm breasts of his nubile nightly visitor, traveled upward to the nape of her neck, and paused. Curiously, he nibbled and tasted her skin.
“That feels good,” she said with a sigh.
He lowered his body onto hers and pressed himself inside her continuing to thrust rhythmically as her head gently hit the headboard. She dug her nails into his back scratching his skin and drawing blood. He grunted pushing harder and faster.
Within a black swirl, Katerina appeared in the doorway. She watched Siegfried's blood run down the curve of his back as he made love to Irena. She moved toward him, elevating her palm just above him to feel his sexual energy.
He rolled over pulling Irena on top of him. She laughed, gyrating above. She too lowered herself nibbling on his neck. “Feel good?”
Siegfried widened his eyes suddenly seeing Katerina. He sat upright with fright. “Kat—!”
Katerina disappeared instantly.
Irena rotated her head in the direction of Siegfried's gaze and saw no one. ”Kat?”
Siegfried collapsed on the bed, the moment ruined.
Irena crawled off his body. “Who is Kat?”
“No one,” he said hoping she would believe.
She threw her cloak over her shoulders. “If you have another woman, Siegfried that is fine with me. Just refrain from screaming out her name while with me.”
He pulled on his pants. “No. It is not that. It was nothing. Just an illusion.”
“Maybe you are working too hard, too much stress,” she said gathering her stuff to leave.
“It is late. Stay,” he begged
Irena grinned and kissed his chin. “It is a short walk. I will be fine.” She blew him a kiss at the door.
Outside the wind howled and Irena held her hood tighter around her neck. She spun around and saw another cloaked shadow. “Hello!” she called and received no response. “Hello, is someone there?” She looked around fearful back-stepping to Siegfried’s door.
The shadow neared her with the force of a howling storm. Irena had no time to react when Katerina pierced her teeth into her neck. Irena’s life evaporated into Katerina. She vanished with Irena still in her embrace.