An amusing mirror to the society (Book Review - A Dog Eat Dog-food World: By C. Suresh) 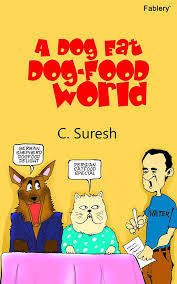 
The Prologue of A Dog Eat Dog-food World begins with an ambiguous, philosophical, offbeat write-up by the author describing what makes history.

"You must all be familiar with the story of Adam and Eve. The new fruit-seller in town - The Serpent - sold them the idea of plucking apples fresh off the tree. We all know what happened to that duo and the history of all their descendants. But, do any of us know what happened to that Serpent? Yes! I thought not! It is ever thus. Someone gives wrong advice - with deliberate malice or careless stupidity - and goes on his merry way. The ones who take that advice are the ones who suffer and, by suffering, make an entry into the annals of History."

And I was hooked.
His analysis and arguments are the kind that make you think, 'Very interesting. I am surprised I never thought of it this way'.

"To make History you not only need to change yourself, you also need to interfere with and change other people."

Then he clarifies that the book is a pseudo-history. It had me googling the word.

Any work that claims to be history, but does not use established historiographical methods; especially one that uses disputed evidence and speculation rather than relying on the analysis of primary sources - Source Wiktionary

As the book starts, we are introduced to the world of Spike Fortune, an eccentric rich man whose sole source of worry is how to spend his money. He is obsessed about spending all his money in his lifetime. And he has a lot of money.

The events that follow has him starting a dog-food business, and the fun begins.

A Dog Eat Dog-food World is a laugh riot.

We live in a pretentious, materialistic world. But it's so boring, unimpressive, and ineffective to just say that.

So, C. Suresh tells us a pseudo-history explaining one of the aspects of how this weird society of ours came to be. A society where, among other insensible things, a dog should eat only dog-food.

Does that sound senseless? Well, you could say it is. But, surprisingly enough, it is not.

The author mocks the world of Spike Fortune and his competitor, Tom Rich. Their world though is a mirror to the society that we live in.
Read between the lines, shake your head at the bitter truths around you, enjoy how the author plays with words, ponder over his explanations...

I am sure you know someone who tells a joke with such a straight face that when he/she says something quite unbelievable, you are not sure whether it's a joke or not, you pause, look them in the eye, trying to figure out whether to laugh or stay on with your serious face.
Is this a joke, or could it be true?
We do live in a strange, anything-is-possible kind of world.

Now, imagine C. Suresh doing the same to you with his wry, straight-faced satire through this book.

As Spike find his way through the maze of managing a business, what we get are management lessons.

Everything from the first project report (that no one reads) to Scientific Market Research has found a place in this pseudo-history.

I am not a management student. I don't know or understand the management laws. And I loved reading this. I can just begin to imagine how hilarious, and surprisingly poignant, it would be for one who does.

There are books you love to discuss and share and quote. A Dog Eat Dog-food World is one such book.

As I was reading this book, I thought of the pseudo-history in Rudyard Kipling's How the Camel got his hump; of the satire of PG Wodehouse; of the humour of TV Serial Khichdi... each of these I enjoy tremendously.

Just as I enjoyed reading about the Cats and Dogs of the world of C.Suresh's book.

They say, if someone enjoys working in a movie, you can see that enjoyment in their performance.
I really feel, the author must have enjoyed writing this book. Because I can feel him smiling through these words.

There are profound lessons in not only humility and simplicity but also in management, business, relationships,... in the words of this fun story.

*  *  *
The italicised text in quotation marks are quotes from the book.

A hilarious pseudo-history of marketing management, which explicitly denies resemblance to any actual history, and which will be horrified if some semblance be found. The story of a man who discovered that the path of life is strewn with treadmills and, if you get on one by mistake, you could keep running all your life to stay in the same place. The story of how a businessman may just be minding his…err…business and the ‘Invisible Hand’ can cause unexpected consequences to arise out of his innocent actions. There is no point blaming the tale for being exaggerated because that is precisely what it seeks to be – an ‘exaggeratio ad absurdum’ of some facets of the world. Anything you learn from the book – be it the basics of marketing management or a satirical view of Society – you do at your own risk.
The tale only dogs the doings of
Spike Fortune who only sought to feed dogs and, later, sought more dogs to feed.
Jerry Fortune who, being fortuneless, gets dragged helter-skelter behind his uncle Spike in the latter’s careening pursuit of commercial success and gets sandwiched between Spike and
Tyke who was Spike’s resident genius on enticing dogs with their wares. He also has to help Spike in his rivalry with
Tom Rich, who is unwillingly dragged into upstaging Spike and tries to do it by teasing the palates of cats, helped by the bumbling efforts of


Jasper Rich who would rather be partying than chasing cats with cat-foods.
*  *  *

Spike Fortune, who, being unable to justify his existence by making money, is obsessed with justifying his existence by spending all his inherited wealth. Lead into the paths of commerce, he discovers that, while it may seem attractive to set out to lose money, the natural consequence of having people consider him a loser was indigestible. Having set out to feed dogs, Spike becomes obsessed with feeding more dogs and, later, having more dogs to feed.
Jerry Fortune, who discovers that there are perils to having your livelihood depend on a benevolent uncle. Tied to his uncle’s coat-tails by a need for sustenance, he is dragged helter-skelter behind Spike in the latter’s careening progress in pursuit of commercial success. Having first been a mere interpreter between his uncle, Spike, and the resident marketing guru, Tyke, he later finds that being in the middle can get very uncomfortable, indeed.
Tom Rich, who had never realized that the easy contempt he had for his schoolboy acquaintance could prove so dangerous. Spike’s meteoric rise in the world of Commerce puts him in a position of either having to prove himself better or have all that contempt come back with usurious interest. He drags his nephew, Jasper, along in pursuit of teasing the palates of cats.


All that Spike and Tom had wanted was to be a winner in their respective businesses and, more importantly, in their own private game of one-upmanship. They had no idea that their humble quest would redraw the contours of Society and set in place principles that both businessmen and Society would live by.
*  *  * 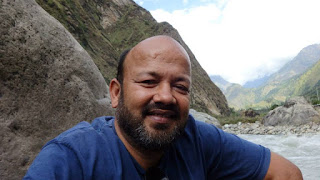 Fiction has been an addiction but the need to make a living took Suresh through Chemical Engineering and a PGDM at IIM-Bangalore and, from thence, to a long 16 year stint in the area of finance with specific expertise in fertilizer subsidies at IFFCO and a further two years as consulting expert in the same area. That, in his words, about sums up the boring part of his life, except for the people he was privileged to meet.
Born on 27 September 1963 in Chennai, Suresh can be a dithering Libran most of the times. A company town upbringing at Neyveli and Engineering at Annamali University, Chidambaram was leavened by management education at IIM-Bangalore and, later, working life at IFFCO, New Delhi. Having decided very early in life to write full-time after securing a financial future – which also incidentally meant that he remained single in order to make it as early as possible - he quit employment at the age of 41 and his consultancy at 43, and returned to Bangalore.
Otherwise, he can be described as a mess of contradictions – a bookworm but avid trekker; alone but never lonely; enjoys solitude but loves company; lazy but a perfectionist, the litany is endless. Trekking, which side-tracked him from the writing for which he quit his job, is a major passion and he does, at least, one trek in the Himalayas every year in addition to numerous local treks.
He reignited his passion for writing with a fairly popular blog. The blog has been rated among the Top 5 humour blogs in India, twice in succession - in 2014 and 2015 - by BlogAdda, and has also been listed third among the Top Humour Blogs.
He also has a short story published in a collection “Uff Ye Emotions” and has edited and written a novelette in an ebook anthology "Sirens spell danger".