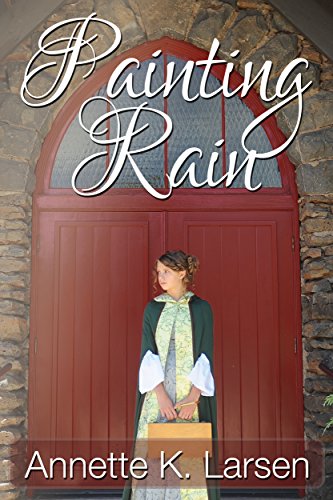 When I had signed up to review this book, I must have read about it.
Now much later, when I started reading it, I didn't remember anything about the book. Not even vaguely what is was about. I just knew that I must have found the blurb interesting.

As I started reading it, I was hooked from the first word.


Princess Lorraina - Raina - has experienced life-changing loss. Her recent experiences have made her question her belief, her behaviour, and her attitude.

The dedication of Painting Rain is
"For anyone who's ever struggled to be extraordinary."

So apt.
I don't see Painting Rain as Raina's struggle to be either a better artist or a better person... It is both of these, but it is much more.
For me, it is indicative of everyone's struggle. Raina struggles and discoveries stand true for any art, any profession, any person.


While writing about Raina's painting and her painting lessons, the author beautifully weaves in her life story.

The emotions are described very finely. Each emotion detailed. It's not slow though, it's intricate, relevant and interesting.

Certain parts of Painting Rain are especially poetic and sensitive...
"Flowers are like the legend of the phoenix. They only die so that they can come back more vibrant and beautiful."


Painting Rain is a love story. It is a story of a painter's painstaking journey to be good enough to 'paint rain'. For me, it is a story of discovering oneself.

"A person can only rely on the strength of others for so long before beginning to drag thos other people down."

There's more to life than who you are with. One has to be at peace with self, before searching for acceptance from others - my takeaway from this book.

"Having someone dependable in your life is good, of course. But not being able to function without them... That seems like a bad thing."

There are some books that are a delight; that when you read, you feel grateful that you came across them.

After all, there are so many books around that it is, at times, sheer luck that one comes across certain books.

Painting Rain is one such book.
I loved reading Raina's story and highly recommend it.


I received a free copy of this book in exchange for an honest review.


The italicised text in quotation marks are quotes from the book.

Blurb
How do you heal your heart after tragedy leaves you broken? When the person you loved didn’t deserve it and they can’t earn your forgiveness because they’re already dead? How do you move on, and heal, and love? If you’re Princess Lorraina, you paint. A year ago Lorraina watched Tobias die, and she still doesn't know how she's supposed to heal—or forgive. How can she when she’s still running away? In an attempt to reinvent herself, she steps outside her comfortable life as princess and seeks the tutelage of a master painter—a man who is not at all impressed by her pedigree, and demands not just talent, but emotional honesty. Struggling to learn what’s being taught, she finds herself drawn to someone who not only knows her secrets, but who she once considered far below her notice. Now she is compelled to seek him out despite knowing their relationship would be forbidden if discovered. Staying away from him doesn’t seem possible when discovering him may be the key to healing her heart and rediscovering herself.

Excerpt
“Now.” Master Sterrino stepped toward me, grabbing my arm and pulling me forward until I stood in front of the canvas. He jabbed a finger at the blank expanse. “This is your one chance. This is it. So I suggest you take it! If you are so convinced that I should spend my time teaching you instead of a worthier candidate, then prove it!” My chest rose and fell as I battled my emotions. I fought for poise, for dignity. I fought for the righteous indignation I had felt only moments before. But his words screamed through my head, over and over until all I could hear were the words Tobias had spoken to me. What’s pathetic is that you have one chance. And this is it. I—am it. I’m your one chance to choose, and you won’t take it! It had been a long time since I’d felt this kind of burning anger, and I hated it. I hated that Sterrino had found a way to fling me back into the muck that I’d been in throughout my youth, that he could make me feel isolated and unwanted. What did he want? For me to paint something angry and disgusting? To tear open my healing heart and smear my own blood all over the canvas? I had put up with Dante’s provocations—his odd mood swings—all in the hopes of having a chance to work with this man, to show him what I could do. Now as he stood there, mocking, I couldn’t make myself move. “That’s what I thought,” he said with grating satisfaction. “Brilliance comes from experiencing life, from true love and true loss. I didn’t expect a privileged member of the royal family to be acquainted with either.” He raised one eyebrow as a final challenge. True loss? He wanted to know what my loss looked like? “Fine.” I stalked over to the paints. “You want me to paint something you’ll understand?” I ignored the brushes and thrust my hand directly into the bowl of deep black, scooping out a handful and slapping it onto the canvas in globs. I grabbed a rag and smeared the paint until it spread in uneven, clumsy strokes across most of the canvas. But I couldn’t leave the black uncontaminated, so I grabbed two more rags, dipping one into the gray and the other into brown, smearing them on top of the black, mixing everything into a muddy mess. If pain and angst was all he wanted to see, then I could certainly give him that. I had spent so much of my life pushing people away—afraid that any close attachments would make me weak, that having fun with my sisters would make me less worthy of my title. I knew what isolation, anger and fear would look like. I threw the rags aside and curled my hands into claws, then dragged my fingernails over the canvas, slashing through the paint, criss-crossing in jagged, broken stripes. I scrubbed my hands on my skirts, forgetting that I had abandoned my apron, and moved on to the bowl of red. The final touch would speak of blood because that had been the ending of my tragic story. The story that I would just as soon have left behind but which Sterrino seemed determined to drag out of me. I grabbed a jar of linseed oil and dumped some into the red, mixing it until it was thin and fluid; then, cupping my hands in the bowl, I filled them with crimson liquid before flinging it at the canvas. It splashed across the surface, dripping down in rivulets. I shook my hands forward, splattering the edges with the excess paint from my hands, then took two steps back, my breathing labored as I took it in. What I had created was angry, torn, and ugly. Exactly what I had wanted. Exactly what I thought Master Sterrino deserved. I swallowed the lump in my throat, trying to tamp down the burning in my chest caused by the blatant reminder of the pain I used to cling to so desperately. I tore my gaze away, refusing to claim it as my own and spun to face Master Sterrino. He was staring at me, his eyes intent but unemotional. I flung one paint-caked hand toward my work. “There you have it,” I declared. “Enjoy.” I sank into a mocking curtsey, but as I did, it reminded me too much of the way I used to treat people, of the way that Tobias used to taunt and humiliate, and I hated myself for stooping to such depths. I turned without meeting his eyes and stalked out of the studio.

Author Annette K. Larsen
I was born in Utah, but grew up in Flagstaff, Arizona and St. Louis, Missouri, the fifth of seven children. I attended Southern Virginia University and Brigham Young University, where I studied English and Theater. I now live in Idaho with my husband and four children. I have Charlotte Brontë to thank for the courage to write novels. After being bombarded with assigned reading about women who justified abandoning either their families or their principles in the name of love, I had the great fortune of reading Jane Eyre. And that was it: finally, a heroine who understood that being moral and making the right choice was hard, and sometimes it hurt, but it was still worth it. After rereading it several years later, I realized that if I wanted more books to exist with the kinds of heroines I admired, then I might as well write a few myself. My books are about women who face hard choices, who face pain and rejection and often have to face the reality of sacrificing what they want for what is right. The consequences are often difficult or unpleasant, but in the end, doing what’s right will always be worth it. I believe there is no substitute for good writing or good chocolate. Fortunately, one often leads to the other.