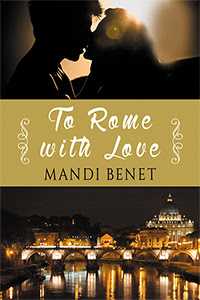 Gaby is a chef, Silvio teaches art history, both are going through divorce, and rome with its beauty is where they meet.

A romance where the both the people involved are very clear in their mind that they are not at all interested in being in a realtionship, make it more interesting.

To Rome with Love is a story that is in parts predictable, but it is the way that it is a very enjoyable read.

To Rome with Love is written in third person narrative, mostly from Gaby's point of view. But Silvio does get his say once in a while, when his feelings and decisions are described.

The attraction between the two is potent from the very beginning of the story.

"The man was like some big force field pulling her toward him."

Gaby has a very interesting and imaginative mind. The author has described her thoughts in a very distint manner. I am not always sure that I like it, but it certainly makes for an engaging read.

"A girl could hang coats from those cheekbones."
"A woman with the body fat of a Sony Ericsson flip phone..."


There is a lot about Italian culture and cooking. Gaby being a chef and Silvio, a architect, both give ample chance to have the readers know and relish their time, .
"...in Italy it was a crime not to eat, particularly if your hostess was cook."
"...lost in a city in which to get lost is one of its most perculiar pleasures."
"...great embarrasment, like a Taliban wife at a nudist colony."

If you like reading romantic stories, if you enjoy quick reads, this is the book for you.

A story that celebrates the happiness of falling in love.

*  *  *
I received a free copy of this book in return for an honest review. 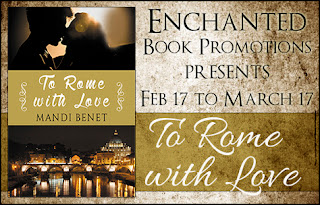 When Gaby Conte’s Italian husband, Danieli, abandons her for a young Peruvian waitress at a restaurant they co-own in San Francisco, Gaby seeks refuge in Rome with her best friend Maria. There, she swears off romance for a long while and Italian men forever. That’s until she meets Silvio, who belongs to an old, aristocratic Roman family and lives in a palace alongside the best private art collection in Rome. Silvio, who is the cousin of Maria’s husband, is going through his own divorce. He’s gorgeous, of course, which Gaby doesn’t tell him. And arrogant and condescending, which she does. The last thing Gaby needs is more Italian trouble, but the attraction is instant and powerful, and against the backdrop of one of the world’s most romantic cities, both try—and fail—to resist the chemistry between them. But both Gaby and Silvio have made a rule never to make the mistake of trusting in love again. Will they realize some rules are made just to be broken?


*  *  *
About the Author: Mandi Benet
Mandi Benet grew up in England and published her first piece of fiction when she was twelve. She has been scribbling away ever since as an award-winning journalist— covering everything from the Democratic Convention to the Oscars for major American national newspapers and magazines— and as an author, writing women’s fiction and contemporary romance with rich, original characters. Mandi is a member of RWA National and the San Francisco branch of RWA.