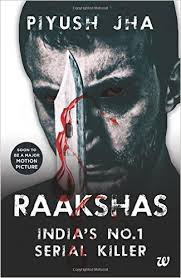 "He became a killer the minute he was born; his mother died in childbirth." - the opening line of Raakshas.
Reminded me instantly of the beginning of Jeffrey Archer's Kane and Abel - "She only stopped screaming when she died. It was then that he started to scream."

The words 'he became a killer' give the moment of a child losing his mother at the time of his birth a sinister and scary feel. From the first line, Piyush Jha conjures up dark, haunting images of the life of the unfortunate child who grows up to be India's No. 1 Serial Killer.

Raakshas is written from the viewpoint of Maithili Prasad, Additional Commissioner of Police, who recreates the life of Raakshas, just as she tells about her own past and present life.
The narrative is chronological.
The tone of the narrative takes a softer and protected tone with Maithili's entry, just as her life is, till circumstances and bad judgment changes her perspective of life.

The cover of the book declares - 'Soon to be a major motion picture'.
I recently read another book with a similar claim. That particular book was a bit of a disappointment. So, for me, this declaration is not something that would attract me to the book. It is actually the opposite.
I am happy that I read Raakshas despite this because I enjoyed reading this book.
As I was reading it, I could imagine it being made into an interesting bollywood movie. Actually, I kept imagining Rani Mukerjee of Mardaani as Maithili Prasad. I keep wondering if my imagination would have taken this direction without the 'motion picture' information.


Even though the opening line of the Raakshas indicate that the boy became a killer from the time of birth, the way the book is written, one keeps questioning how different the life of this boy would have been had it not been for his traumatic childhood.

"...he was driven, and not born into the life he finally led."

The killings are gruesome, the cover is scary, and my threshold for such horrifying genres is rather low. Still I am not haunted by the victims of India's no. 1 serial killer. It is his growing-up years that are on my mind now that I have finished reading the book.
When the crimes are committed, you keep wondering who is really to blame.


The author did create a psychologically impactful story of the boy who is a victim himself. His victims, on the other hand, don't get enough time with the reader before they are killed.
But the thought of this guy is scary because it could be anyone, the person-next-door, literally.

A major part of Raakshas is set in Mumbai.
"...Mumbai is hard, as hard as a diamond. And like a diamond it can shine bright upon you or cut through you to the bone if you allow it to."

Just as the problem that Maithili faces in the book with the belief that 'serial killers were essentially a western concept and didn't really exist in India.' I have seen serial killers movies and read serial killers books but never in an Indian setting.
There are hindi words, mumbai slangs and a crude, slangish name - 'mundi-cut killer'.

In an Indian setting, with its' police force needing to accept the truth before fighting it, Raakshas makes for an enjoyable read. 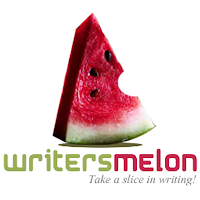 
What made him a serial killer?
Was he born with homicidal tendencies?
Did a harrowing childhood render him criminally insane?
The questions haunt, Additional Commissioner of Police, Maithili Prasad as she discovers the horrific murders across Mumbai. As she spearheads the greatest manhunt in Mumbai’s history, she’s determined to contain the reign of terror unleashed by the ruthless serial killer. But before that she must grapple with her personal demons that surface to plague her with self-doubt.
Just as it seems that Maithili has begun to understand the deep-rooted resentment that drives the serial killer, he turns around and makes her the object of his revenge. Will she emerge unscathed from this ordeal?
This thrilling narrative of a serial killer’s life and the unusual and challenging investigation to catch him, uncovers a chilling trail of unspeakable torment and cruelty—the tale of… Raakshas.

Piyush Jha is an acclaimed film director, ad filmmaker and the author of the bestselling novel, Mumbaistan and Compass Box Killer.
A student political leader at university, he pursued a career in advertising management after acquiring an MBA degree. Later, he switched tracks, first to make commercials for some of the country’s largest brands, and then to write and direct feature films. His films include Chalo America, King of Bollywood and Sikandar.
He lives in his beloved Mumbai, where he can often be found walking the streets that inspire his stories.