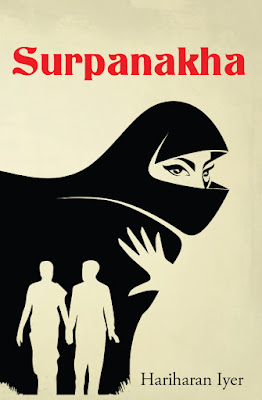 Sesha, the Chief Minister of Tamil Nadu, is not a typical politician. He's educated with experience of a corporate job. He is in politics because of his capabilities, and not connections or family.

The book starts in a courtroom where Sesha is being tried for being the mastermind behind the gruesome murder of 73 Kannadigas. An accusation which puts a blight on all that the Chief Minister has accomplished.

Surpanakha is a very fast moving story - a maze actually. There seem to be twists at every corner.
Each chapter tells the story from the perspective of one of the characters. And boy, does the very essence of the story change depending on whose point of view you are looking at it from...

Each chapter of Surpanakha focuses on a certain character. And it is so easy to change ones' opinion depending on whose perspective one is seeing the events from.

Perception... so important at how we look at people who live in the glare of media. How quickly we change our opinion about a person. The same happens in this book. I'd think one thing about a character and a couple of pages later, my views would change. Soon enough I was engrossed in this story of political, social and emotional turmoil trying to figure out who's right and who's wrong.

Most characters of Surpankha leave a lasting impact.
There's Hebbar, a man with an impressive rags-to-riches story, who has lost his wife and son in the attack of which Sesha is accused.
Sesha's wife, Mythili, a woman devoted to her husband. That is not all that defines her. She's brave and has a mind of her own.
And many others.

Surpanakha is a page-turner from the very beginning. It is an interesting story and the interest is retained as little details about background that the author keeps telling. These details changes the truth as one sees it.
True for the politics, or rather life itself, in real life too. We believe things on basis of what little is known or revealed to us.
Surpanakha is a story which tells us how confused and volatile public perception can be.

The title of this book creates a mystery of its own. Surpanakha was Ravan's sister. She was insulted by Lakshman, Lord Ram's brother. Ravan abducted Sita, Lord Ram's wife. And Ravan's effigies are burnt every Dusshera till date.
Trying to figure out, who the implied 'Surpanakha' has you trying to read between the lines throughout. Is the explanation a bit anti-climatic? I am not sure...

It is a cruel world out there, crueller still for those who don't fit into the set moulds of expectations. With grim realities of the politics of our times, characters that are multi-faceted, and relationships that stand the test of time, Surpanakha is a book I enjoyed reading.

Educated, young, no-nonsense bearing, able administrator—these are the qualities that won Sesha the loyalties of the people after three years of rule as the Chief Minister of Tamil Nadu. An allegation that he was the mastermind behind the murder of 73 Kannadigas threatens to bring him down but he is miraculously saved in the 11th hour.
Even before he can relish his victory, Sesha is slapped with the charge of sexually offending a young nurse. This time round, the case is strong and his supporters are uncertain. Worse, his teenage daughter calls him 'vile' and walks out of the house. While Mythili, his wife promises her full support, her secretive activities—undertaken with the help of a retired cop—is a cause of concern for Sesha.
Will Zarina, the human-rights activist, succeed in bringing him down? What about the insinuations of a celebrity lawyer that he is casteist and anti-minorities? When the young nurse is found dead, the case becomes even more complex. Who is innocent? Who is guilty? And who is the mastermind?
Links for downloading e-books: Amazon India | Amazon US | Amazon UK
Links for ordering paperbacks: Amazon India | Flipkart 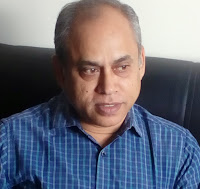 Hariharan Iyer is a finance professional based in Dar es Salaam. Not content with just a rewarding corporate job, he took to writing a couple of years back. He blogged on media and current affairs for a year at valadyviews.blogspot.com before hitting on the idea for this novel. An idea so powerful that it convinced the accountant in him that he could put together not just a balance sheet but an intriguing political thriller as well. He has definite views on politics, NGOs and media ethics and has tried to package them in the form of an interesting novel.

Hariharan lives with his wife in Dar es Salaam while his two sons are pursuing their ambitions in India.
*  *  *


Excerpt
Sesha was getting conscious of Mythili’s intense gaze. He knew he would not be able to avoid her for long, but he could not afford a conversation either. He took out his cell phone and started tweeting—his best possible excuse for the moment. The case had gone against him, irreversibly perhaps. A possible adverse verdict was staring at him, and only a miracle could save him from that eventuality. Sesha was offered an adjacent room for privacy—a privilege he could enjoy as along as he was the Chief Minister of the state. As long as? Or was it as short as? If the media’s prediction was right, the judgement would be adverse. In that case, he would be arrested immediately. So, if he had to enjoy the perquisites of officialdom, he had only a few more hours left. Still, he declined the offer of the court staff. Sitting in the courtroom meant enduring the prying eyes of media men, but shutting himself up in a room would be worse. His anxiety would kill him. He was never a darling of the media. In fact, the media had not taken his entry into politics lightly. For the journalists, he was an outsider. Not just an outsider, he was someone who did not even make an attempt to befriend them. He did not throw lavish late night parties nor did he shower state courtesies on them. He was very different from the Dravidian politicians the media had been used to. He was too young compared to all his predecessors; he wore smart casuals instead of the typical white full-sleeved shirt and dhoti that were the trademark of Tamil Nadu politicians; he was not an atheist with a particular dislike only for Hindu Gods as had become fashionable among Dravidian politicians. As a result, the more charitable among the journalists felt he was indifferent while others concluded that he was downright arrogant. “Coffee?” he asked Mythili without lifting his head from the phone. He knew Mythili very well, rather too well, to guess what was going on in her mind. Was he really cool? Or was he faking it for her sake? “Sesha, are you not worried about the verdict?” She had asked, finally, the question he had been dreading. He turned his face away from her. She would not let him off so easily. She grabbed his chin with her left hand and turned his face towards her. It was clear he could not avoid her anymore. He would have to talk to her. He grabbed her hand and took her to the corridor. They reached the far end where it turned right. Those standing near the courtroom would not notice them unless they made an effort. He leaned on the railing and circling his hands around her waist, pulled her closer to him. “What’s bothering you, Sesha?” She took out a small folded paper packet from her handbag and opened it. Prasadam from the Anantha Padmanabhaswamy temple. She applied a tilak on his forehead and kept the tulsi on his ears. “Sesha…” She wrapped her hands around his waist and buried her face in his chest. “Please say something. Your silence is killing me.” Her tears drenched his shirt. He lifted her face and planted a kiss on her forehead. “I’m innocent. All that…” His voice trailed off as they were greeted by ecstatic slogans of support from the crowd outside. “Thalaiva! We’re with you.” While his visual sweep had covered the people in the corridor, in his hurry to explain his position to her, Sesha had not seen the crowd of supporters and media teams waiting in the square around the Karikalan statue. Realising that they were getting emotional, the crowd must have allowed them their private moment. But when she hugged him and cried on his chest, the crowd felt compelled to express its support. “Don’t worry thalaiva, we know you’re innocent.” It was a deafening chorus of support. Sesha and Mythili discreetly separated from each other. He waved hesitantly at the crowd.