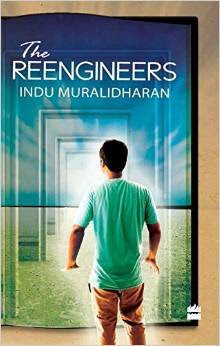 
Chinmay, Anu and Sabi are three friends who have no other friends. Except for books, that is.
The three friends are misfits in the society, even among their own family members.

"We are ugly ducklings of the same feather..."

Chinmay Narayan is the protaganist of The Reengineers.
On the first page itself, he tells that he had two goals - to top the class ten board exams, and to kill himself after the exams. In the very next sentence, he clarifies that by the next afternoon, his life and plans had changed.
A sensible, oversensitive boy with the insensible thought of suicide in him. He believes he doesn't fit in.
As readers, we now have a notion of where this story would go, and probably end. It is the 'how' that keeps you hooked.

Despite the knowledge and reminders of the upcoming suicide, there is a relaxed, serene feel to the book.

The author plays with words to describe common emotions with an elan.
"...I waited, aching to find a sentence that would draw me in, that would free me from my mind for at least a while."

The protagonist talks about Chennai. I have never been to Chennai, but even though I can't relate to the reminiscences of the city per se, what radiates through the words is a warmth and pride for the city that surpasses time and changes. A feeling that is not limited to one city. It is the expression of 'home'.
"The feeling of home still pervades my city, despite the impersonal the impersonal flyovers that now criss-cross above the old familiar roads, the acres of shining skyscrapers that buzz with the sounds of the software cities teeming within them, and the gleaming malls that may soon outnumber the tiny Ganesha shrines on each street..."

The three kids with their innocent, yet profound philosophical discussions are smarter than the rest, yet trying to fit in. Your heart breaks for them.

The protagonist is looking back at that time of life and has no qualms about writing about his own shortcomings. 'I was too full of myself' - one of the things he remembers.

It is a coming of age book. It starts at a time when Chinmay did what his parents desired. He did not know he could choose different. Not while living anyway. So he had decided to end his life.
When the book ends, the life and its' choices have changed drastically.

The moment of epiphany when he realised that he is a 'seeker'.

The language of The Reengineers is rather poetic, dreamlike quality at times. You feel your sense being enveloped by the emotions of the characters whose life is about to be reengineered.

"Fourteen is the age when time first starts to make its presence felt. Time took on such a variety of hues in those days that even my frozen mind sometimes reflected the colours of the world around me, and I could feel my thoughts fluttering in the humid, salty breeze."

The feelings of teenage infatuation...

"O for those days when these tired metaphors were teenagers too, when it was still possible to recite 'Daffodils' and feel thrilled as you gazed at the golden laburnum in bloom. Recognising clichés is a sign of aging. Sweet as the past may be, it best remains pressed within the pages of memory, savoured for a moment or two on quiet Sunday afternoons."

Suddenly the vibe changes. There is mystery, tension, and danger in the air.
The world they enter seems to be a parallel to the world they live in.

As Chinmay learns and discovers, a lot of life lessons are find a pace in The Reengineers.
"It is curious how the weak-minded among us are wired like that, the way we turn subdued and silent when confronting real bullies and yet stand up almost aggressively to those who are genuinely kind to us."

For me, the one major epiphanic moment is when he realises that he's not a misfit. He is a seeker.
So true for so many of us, who go through life dissatisfied, not realising that to want to search for more does not make them abnormal. Irrespective of what others say.

"Everything has a reason, though it cannot always be deduced for we cannot see the full picture of a life at any point in time."

The story of The Reengineers doesn't rush from one event to the other. It relishes the emotions.

We know from the beginning that Chinmay wants to commit suicide and that he won't do so. The how keeps you hooked. And it is to the author's credit that she doesn't disappoint in the process.
The path the story takes is not predictable.

I have lent this book to my nephew now, who is studying... well, engineering. I am going to insist that the rest of the kids (who are still in school) in the family read The Reengineers too. Nothing can explain what I feel about this book better than this fact.
I feel that it is a relevant book for everyone - students, corporate employees, spiritual aspirants... actually anyone who is looking for a more contented, confident life. 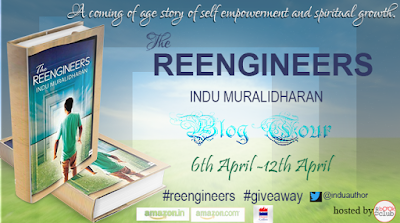 The Reengineers
by
Indu Muralidharan
A HarperCollins Publication (Harper Element)

Chinmay Narayan is plotting to kill himself. He is a misfit at school, his parents are about to divorce and the love of his life doesn’t know he exists. It seems pointless to go on with such a dysfunctional life. But before he gets anywhere with that plan, Chinmay and his friends, Anu and Sabi, stumble into the eerie world of Conchpore through a portal in Uncle RK’s library.

They find themselves in The Seeker’s School, where you can buy spiritual courses that will bring you enlightenment. While the seekers seem unaware that there is anything amiss, Chinmay and his friends stumble upon a strange and sinister plot that the teachers and students are caught up in. The three youngsters suddenly find themselves in danger, and their only hope is the charismatic Siddharth, an old student of the school who has come to visit. Chinmay discovers that Siddharth is seeking catharsis from his dark past by writing a book—a book with Chinmay as the protagonist. He realizes that his own story is a mirror image of Siddharth’s, which leads to a moment of reckoning for him: can he become the author of his own life?

Set in Madras in the early nineties, The Reengineers dispels the boundaries between fiction and reality to tell a tale that is as much a coming-of-age story as it is an inspiring narrative of self-empowerment and spiritual growth. 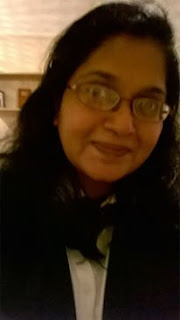 I am a writer from Chennai, India. To me, reading and writing are means by which I try to comprehend the meaning of life and reality. My first novel The Reengineers (HarperCollins, 2015) is a metafictional exploration of the meaning of the self, examined through the relationship between an author and the character of his novel. I am working on two other novels at the moment, both centred around the healing power of fiction and its significance in 'real' life.

I live in London, balancing a full time day job with writing and studying a part-time Master's Course in Creative Writing at The University of Oxford.