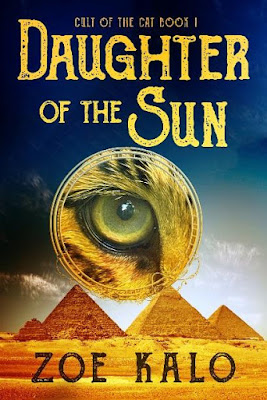 Trinity is a sixteen-year-old girl in an orphanage near London.

As the book starts, she is at a turning point in her life. She is consciously becoming aware of how 'different' she is - she never gets sick, her sharp senses, her exceptional affinity to cats, and more.

Now a mysterious female, who gives hostile vibes, is here to take Trinity to her long-lost grandmother.

Incorporating Egyptian mythology, the first book of the Cult of the Cat series tells a graphic tale of Trinity's discovery of the mysteries of her family and her destiny.

From the very beginning, I connected with Trinity. As she struggles within herself over her mysterious feelings, as she fights with the bullies in the orphanage, as she is taken to a world that is alien to her and yet is more of a home than the orphanage every was, as she discovers the many secrets of her past, her emotions are written so that one feels for her.

As I started reading this book, I had two different images in my mind.
One was of Halle Berry in Catwoman. Well, that was the wrong image, though I do wonder where the Cult of the Cat series takes Trinity and if there will be a glimpse of the Catwoman as the story moves forward.
Another is Harry Potter. This is a given.
The fact that Trinity is an orphan, unaware of her realities, with a mystery surrounding how she happened to be in the orphanage is reason enough to think of Harry Potter. But there are no other glaring similarities between the two.

It is a book that keeps you interested with its' fast-paced fantastical story, and the emotional struggles of its' characters.

As the story of Daughter of the Sun ends, there is a closure to some mysteries, while others are left with a hint of more to come.
As Trinity gets engrossed in her new world, she doesn't lose connection with her old one. This leaves the reader with a lot more to look forward to in the next book of the series.

With a hint of forbidden romance, Daughter of the Sun tells an engrossing tale the magical world of Goddesses, Egyptian symbols, and the Island of Cats.

Cult of the Cat series blurb
According to ancient Egyptian prophecy, three feline goddesses—Bastet, Sekhmet, and Mafdet—would one day be reborn as triplets during a solar eclipse.
But someone—or something—separated them at birth. Because if ever they were reunited, they would unleash a blistering power that could destroy the world.
In an adventure where the past confronts the present, and blood, betrayal and secrets abound, the triplets face each other for the first time. And discover they’re the only force able to stop the evil god Apophis from enslaving humanity.


Daughter of the Sun, Book 1 - blurb
Sixteen-year-old Trinity was born during a solar eclipse and left at the doorsteps of a convent along with a torn piece of papyrus covered with ancient symbols. Raised by nuns in the English countryside, she leads a quiet life until she’s whisked away to the Island of Cats and a grandmother she never knew.
But before they can get to know each other, her grandmother dies. All that Trinity has left is a mysterious eye-shaped ring. And a thousand grieving cats. As Trinity tries to solve the enigma of the torn papyrus, she discovers a world of bloody sacrifices and evil curses, and a prophecy that points to her and her new feline abilities.
Unwilling to believe that any of the Egyptian gods could still be alive, Trinity turns to eighteen-year-old Seth and is instantly pulled into a vortex of sensations that forces her to confront her true self—and a horrifying destiny.


About the Author
A certified bookworm, Zoe Kalo has always been obsessed with books and reading. Reading led to writing—compulsively. No surprise that at 16, she wrote her first novel, which her classmates read and passed around secretly. The pleasure of writing and sharing her fantasy worlds has stayed with her, so now she wants to pass her stories to you with no secrecy—but with lots of mystery…
A daughter of adventurous expats, she’s had the good fortune of living on 3 continents, learning 4 languages, and experiencing a multicultural life. Currently, she’s working on a Master’s degree in Comparative Literature, which she balances between writing, taking care of her clowder of cats, and searching for the perfect bottle of pinot noir.