Celebration of writing (Brenda Moguez's Nothing is lost in loving) 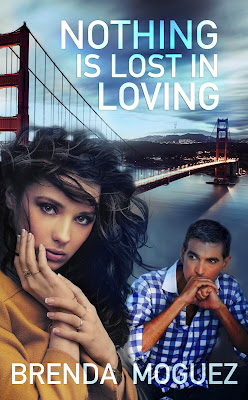 Nothing is lost in loving starts as Stella's period of mourning over her husband's death is ending. It is not the ceremonial mourning period that has ended.
It has been two years since the death of her husband, Bobby.

"I don't tread lightly over the past. The incidental memories we made in the passing of a day are addicting and all too alluring. After his death I could cocoon myself in. I held on to the past with a vengeance."

But things are changing. She's dreaming of another man and Bono sees this as a sign that Stella's ready to let go of the past.

"Grief recovery is an arduous process to say the least. You eventually get to the other side, where breathing isn't labored, the sky becomes blue again, you can feel the breeze on your cheeks, and little by little the heart you thought was covered in layers of freezer burn gradually thaws. After after, long, long after, the love you thought you lost forever resurfaces and you take your first sip of life."

In Bono's words to Stella - "Who are you, and what have you done with comatose Stella?"

Brenda Moguez has carved each of the characters of Nothing is Lost in Loving with care. Even as they move forward, even as they seem to change, their underlying qualities are reflected.

Stella is an honest preson. She speaks her mind, and is happy doing so.
As she herself says -
"I don't spend a great deal of time rearranging my words before speaking. I tried it once or twice, but the other person left before I finsihed processing."

Brenda Moguez's Nothing is lost in loving is written in first person narration of Stella. Despite the typical office job that she has had for a while when the book starts, she is a 'creative woman', a writer at heart.
The author has reflected this writer's flair while writing from Stella's point of view.

The story of Nothing is lost in loving is not predictable.
As the story started, I assumed a few things. The author makes sure that the story continues to surprise and interest you.

"...love is big like the ocean and sometimes it feels like the waves are crashing against my legs. Do you remember how the sand can sometimes hurt when you fall? That's what love is like. It feels good most of the time and sometimes not so good."

I enjoyed this story of Stella's life at a time when it is undergoing a lot of changes. But for me the highlight of the book are the words that the author uses to describe Stella's thoughts.

"The awareness hovers just out of my reach, and I feel a little like Scarlet O'Hara when she is attempting to clarify her feelings for Rhett."

"As I lose myself inside of his kiss, I wonder if there is a hall of fame for 'the  best of the best' somewhere in the Smithsonian, and remind myself to Google kisses later."

Nothing is lost in loving is not a run of the mill story of romance and loving, it is more about life and experiences and embracing them despite the outcome.

"Sometimes life is like that. You catch a lyric in a song, or see yourself in the storefront window, and something about the moment sends a bolt of electricity through your veins, and in the latter half of the moment, the body surges. And you know, you just know, what you felt is change. It's a fleeting but moment. I have no idea where my life is going, but I know it's moving forward." 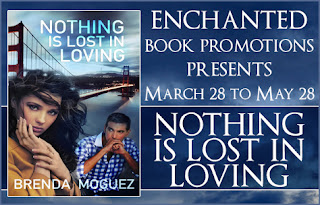 
Buy Nothing is Lost in Loving
Amazon


When Stella Delray unexpectedly loses her job a week before Christmas, which is also the anniversary of her husband’s death, she is forced to stop talking to his ashes, come to terms with her loss, and get her life back on track for her young son’s sake as well as her own. She never expected that posting an ad on Craigslist would send her into the arms of not one but two men, one of whom is her former boss. Now she’s working as an admin for a retired Broadway star, bookkeeping for an erotic video production company, and writing love letters for the mysterious "Oaklander." Adding to the craziness of her new life, her monster-in-law resurfaces and the father-in-law she never met shows up on her doorstep. With the guidance of her best friend, Bono, Stella will learn to redefine the rules she’s always lived by.

About the Author
Brenda Moguez writes the kind of stories she loves to read--women’s fiction, starring quirky, passionate women who are challenged by the fickleness and complexities of life.
She’s particularly drawn to exploring the effects of love on the heart of a woman. She has aspirations for a fully staffed villa in Barcelona and funding aplenty for a room of her own. When she’s not working on a story, she writes love letters to the universe, dead poets, and Mae West. Her second novel, Nothing is Lost in Loving, is set to release April 2016.