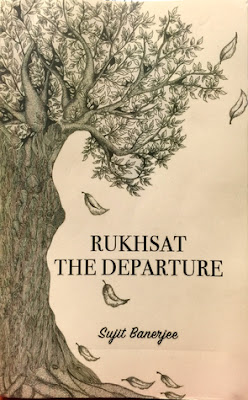 The stories of Sujit Banerjee's Rukhsat have a chord of melancholy running through them. The kind that pulls your heartstrings and keeps you engrossed even as you feel the pain of the characters.
This feeling is aptly conveyed by the title 'Rukhsat' and the cover of this book.

The language of Rukhsat is such that there are details and yet there doesn't seem to be one unnecessary word.
There are times when one reads descriptions which are vivid, yet they don't gel well with the story. Not in these stories though.
In case of Rukhsat, the details are written in a manner that they keep you hooked.
The words flow smoothly. They tell the story, but they don't stand out. And that is the way it should be.

"The wind howled and a door slammed somewhere. The candle flickered and died out. I cursed and turned to fumble for the match box overturning the glass of drink. In the dark I groped for the letters, scooping them up to avoid getting them soaked. I yelled at Kishen and he ran into the room holding the chimney candle – its flame steadier than me. He left the room shutting the door and a hush descended – a kind of quiet flush. I poured a stiff drink and looked at the watch. It was ten past nine – past my dinner time. Kishen only served dinner when I asked him to. I took a sip and picking up a knife – slit open the first envelope to extract a thin sheet of paper – just a page."

The stories are told in a unhurried fashion. They are not slow.
You must know people who narrate stories in a way that they would give small details, and linger on, and yet hold the attention of everyone.
That is what I mean. There are details that you love reading about, and at the same time you are tapping your foot impatiently wanting to know what happens next.

There is pain and longing in these gems. And at times, hope.
There are surprises and twists too... a lingering mystery.
There are stories which are so painful you cringe, others that leave you with a very dim ray of hope (against hope),
The author manages to surprise you as the story ends. In a couple of the stories, I kind of guessed the right ending. But more often than not, I had no idea where the story would lead.

Some stories are of ordinary, everyday struggles. Some are of incidents of exceptional pain or torment. The common thread amongst the stories is that they move you. They make you pause as you feel the ache of the characters, as you wish that things could be different. Yes, that's how engrossed you feel in the world of Rukhsat.

Besides writing poignant stories, the author writes moving dedication and acknowledgments too.
"...to those who shared their stories and left a little bit of themselves with me, inside of me."


The fact that these stories are the author’s take from A to Z challenge is inspiring and awe-striking. Coming out with such perfection from blogging must take a lot of passion and discipline.

These stories are interlinked, yet are complete stories in themselves. They are connected, because you’ll find characters from one story in another, thus adding more detail to the story, giving more insight.

The characters you get a glimpse of in one story become the central character in another, getting you to see the same story from another perspective, with more details.
The beauty of this is that not once did I feel that a story is not complete in itself. But once I read the 'add-on' story, and I go back to read the first one again, the horizon of 'complete' has expanded, it seems.
I am being vague and abstract and I can't think of another way to explain it.
The author describes it perfectly in the Preface. He says about his stories -
"Here are twenty-six of them, some standing alone, and some chatting up with their long lost friends."

The stories of Rukhsat are beautiful. Beautiful... I thought of looking for another word to replace this cliché, but I choose not to. After all, there is a touching simplicity in the words of Sujit Banerjee. 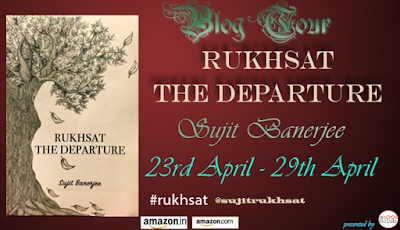 *  *  *
Blurb
Where a story stops, another one begins. The thing with them is, they never walk alone. They always walk with a group of friends. Each reaches its own climax. Then with a final gasp of mortality and despair, fade away. No, they never die, they multiply. To the extent that the original gets lost and new ones are born. Over and over again. Yes, they get lost. No, they never die. They live on, permanently etched in the book of time. And from there, we borrow them and bring them alive. Again. And again. Here are twenty six of them, some standing alone and some chatting up with their long lost friends. When they depart, they leave a lingering fragrance of nostalgia and curiosity. What happened then?

Twenty-six alphabets, twenty-six names, and twenty-six short stories. Each exploring one unique emotion, taking you into the dark recess of the mind. Some frothy and most of them dark. Most standing alone and some facing a mirror, where the same story comes alive in two different ways, through two different protagonist . Meet myriad characters - from the single-minded prostitute to the man on the railways station bereft of any memory; a woman desperate for a biological child to a dead man's trial. Meet a jealous lover with a twisted brain and a gay man's memory of a one-night encounter. Meet twenty-six such characters arrested and sentenced for life inside the pages of a book. Each one leaving an indelible mark on your soul.


Abhimanyu – In the Beginning

I felt the poison of anger raging around me, inside me, pulsating like an entity; anger at the one who betrayed and the one who took advantage of this betrayal. The anger of not being able to stop both. Then the flash of knife and the flowing blood, shimmering in the flames of the torches inside the chamber. Screams followed by hushed voices; bodies being dragged down a flight of stairs. The sound of digging and burying. Later, ruins all around as empires fell and one intrigue chased another through time while swords sliced and arrows whiz past, seeking hearts. Who was I and what was all this about? Why were most of the images that flitted through my head always dark and tinged with red? Rarely, very rarely were they warm and loving. So rarely were they, ever like the sun shining on a cold and shivering memory. 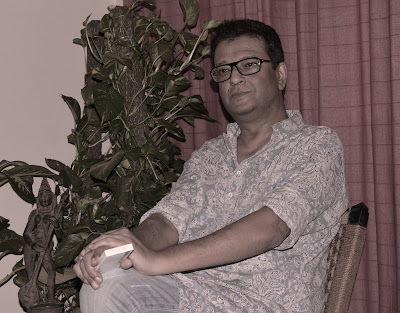 Born to Bengali parents in Lucknow, I grew up in Patna where I finished my post-graduation in Psychology and ended up becoming a tour operator instead of a Psychologist! Which was
good since a Bengali born in UP and reared in Bihar does not make a great Psychologist! Am I now glad to be in tourism? It has taken me all over the world including places you would have never heard of. Eh? How about Tlacotalpan? It’s in Mexico.

Destiny had other plans as well so I became a reluctant healer. A crazy Shaman in Mexico set the ball rolling and it has rolled all the way to Delhi. Today I both heal as well as read Tarot cards. My wife thinks I am mad. My friends think I am weird. I guess I am both.

My first story was published in a magazine when I was seventeen. The Editor made such a hash of it that I stopped sending out my stories but I continued writing. Then I broke my heart and started writing poems; first in Hindi and then in English. All personal collection. They still remain personal. I do shudder when I read some of them! Then the short stories came back and written over two years - now is a collection.