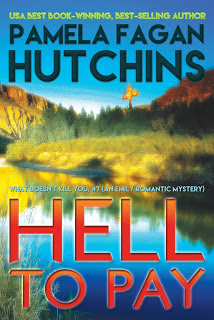 
Hell to Pay starts with a party to celebrate the engagement of Phil and Nadine. The two are friends of Emily and her boss/fiancé Jack.

This is the second book of this series that I read. The first one was Heaven to Betsy. Heaven to Betsy is when Jack and Emily meet. The chemistry between the two was great, and there was hope of a relationship. I miss a couple of books and the two are engaged to be married.
I really have to read the ones I missed.
Anyway, back to the party that Hell to Pay starts with. Interestingly, Heaven to Betsy starts with a party too. But that party was of a very different flavour.

The party of Hell to Pay has Emily happy, relaxed and 'at home', or so it seems when the book begins.

Jack is a criminal attorney, Emily works in his office, and Hell to Pay is a Romantic Thriller.
So, the thrill begins when Phil's friend, Denis is murdered and Phil is the prime suspect.

Betsy, the girl that Emily had rescued in Heaven to Betsy, is staying with a foster family while Emily and Jack are waiting for their adoption request of Betsy to be approved.
The foster family is a member of a suspicious religious group 'Mighty is His Word'.

What I found common is the novelty of Pamela Fagan Hutchins' writing style.
When she describes an individual, she doesn't use the oft-used clichés.

Emily has got braces to get a gap in her teeth.
"I can't believe you got those braces. You look fourteen."
A small detail that has stayed on with me. The author is great at weaving in these small details in the narrative. These do not feel forced or repetitive, rather add a charm to the story.

Just as the previous book I read, Hell to Pay is also written as a first person narrative from Emily's point of view.

When someone shouts that a doctor is needed outside and everyone starts to go out to see what's happening, the author writes Emily's thoughts as -
"Despite the fact that it is statistically unlikely that everyone in the room was a doctor, the crowd moved as one toward the door, with me in it."
And I smile.

Then there is the fact that Emily doesn't 'take the Lord's name in vain or say the F-word'. As a result, she comes up with a number of creative abusive words and phrases that are downright funny.
Mother of Pearl, Mother truckers, Son of a biscuit... and many more.


Dennis' murder mystery, Betsy's adoption, Emily's uncertainty about Jack's feelings towards her, the surprising change in the relationship of her own parents, and as expected her daring, never-back-off attitude make for a very interesting, unputdownable read.

Hell to Pay is a very well-written, entertaining read. Highly recommended from my side.

Big-haired paralegal and former rodeo queen Emily thinks she’s got her life back on track. Her adoption of Betsy seems like a done deal, her parents have reunited, and she’s engaged to her sexy boss Jack. Then client Phil Escalante’s childhood buddy Dennis drops dead, face first into a penis cake at the adult novelty store Phil owns with his fiancée Nadine, one of Emily’s best friends. The cops charge Phil with murder right on the heels of his acquittal in a trail for burglarizing the Mighty is His Word church offices. Emily’s nemesis ADA Melinda Stafford claims her witness overheard Phil fighting with Dennis over a woman, right about the time Phil falls into a diabetic coma, leaving Nadine shaken and terrified. Meanwhile Betsy’s ultra-religious foster parents apply to adopt her and Jack starts acting weird and evasive. Emily feels like a calf out of a chute, pulled between the ropes of the header and the heeler, as she fights to help Phil and Nadine without losing Betsy and Jack.

She says her first book came out in 2012 and that her latest, Hell to Pay, is the seventh book in the series. The books all have ties to Texas, with “an interrelated cast of kick-ass female protagonists.” She says the novel's heroine (“a former rodeo queen turned paralegal”) returns to her home town in west Texas and discovers an extremist cult has set up shop and is terrorizing the local townsfolk.

- As told to Houston Press. 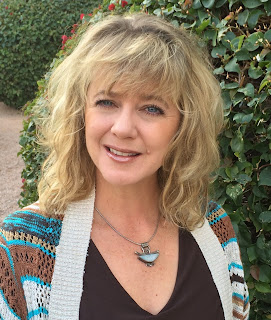 She is a recovering attorney and investigator who resides deep in the heart of Nowheresville, Texas and in the frozen north of Wyoming. Pamela has a passion for great writing and smart authorpreneurship as well as long hikes with her hunky husband and pack of rescue dogs, traveling in the Bookmobile, and her Keurig. Visit her at http://pamelafaganhutchins.com or drop her a note pamela at pamelahutchins dot com.

And if you would like her to visit your book club, women’s group, writer’s group, or library, all you have to do is ask.