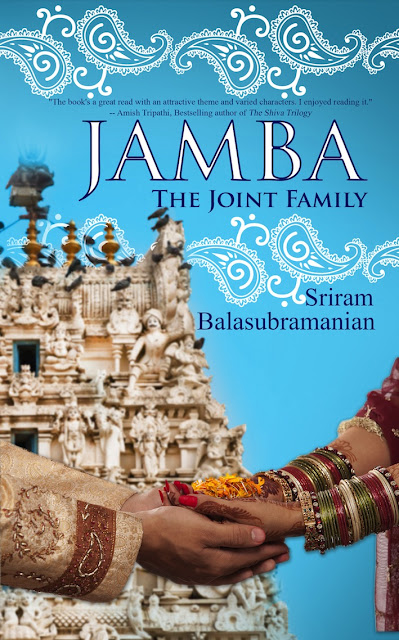 Jamba The Joint Family is the story of Karthik, his grandmother (Jamba patti) and his extended family.
The book is written in Karthik's first person narrative.

He has no grudges against his parents, who couldn't spend much time with him.
He moans about the extended family but clearly is fond of them. And in some cases, would rather tolerate them than disappoint the others in the family.
He is a good guy, sensitive beyond his years, and yet so naive.

Jamba starts with a pre-script, giving a glimpse into the crisis that is to follow during the course of the story. A crisis, which the protagonist believes is going make his joint family 'crumble'.

A wedding in the family is a good reason to get the whole lot together. There is one being planned.

Added to this equation are the American relatives who have come to visit, who are supposedly treated as 'royalty' by the Indian lot.

Jamba The Joint Family is basically a celebration of the good old tradition of joint families. Thus there are many people that are introduced in the book. Some important to the plot. Others are not.

There is a lot of scattered information given that doesn't find a place in the actual plot, leaving many important things either unresolved or just giving a glimpse of them and then not mentioning them again.
One such instance is of Karthik's cousin Lalitha (I so wish she hadn't been called Lalu), who has some deformity in her legs. It is her marriage that makes for the background of this story. I would have wanted to know more about her.

Interestingly although Karthik himself doesn't live in a big family (he lives with his grandmother), it is the maternal family that this story is about.

Take the descriptions with a pinch of salt.

This is the description of the maternal grandparents home 'Vrindavan' -
"Vrindavan had all the elements of a Rajnikanth movie with all the punchy dialogues, swearing by the baddies, motherly sentiments, and all the Tam brahm stereotypes; it had everything."

And assume the sweeping statements are the point of view of a rather naive person, who apparently sees a rosy picture in everything, except for a couple of people he is exceptionally biased against.
"This is the beauty of Indian housewives: they know how to deal with situations in the most effective manner, using minimal resources."
My response would be a sarcastic 'If you say so'.

My problem is that I am too much of a realist (or should I say cynic).
In a short story collection I read recently (David S. Atkinson's Not Quite So Stories), there is a story titled 'Dreams of Dead Grandpa', in which the protagonist keeps dreaming of his grandfather, who has passed away. As I wrote in the review, these stories are good, but absurd.
For me, this story is about a longing to have spent more time with grandparents. Something I can relate to.

As is obvious, I feel this story is too idealistic.
Keep that aside, and it makes for a fine, if too verbose, read about the Tamilian culture and a filmy plot where everything falls into place in the end.

There are too many details. I wish some parts had been edited out.
I assume the author loves Madras, but I have had it with Karthik's love for driving in Madras. In his words, it can be a 'euphoric experience' driving through the chaotic traffic.

The language of Jamba The Joint Family alternates between writing as one would speak, and serious observations that at times sound like preaching. Certain phrases are used so often that they stand out as one reads the book.
There are some stilted conversations, over-simplified emotions, repetitive descriptions.

This book is a celebration of the Big Indian Joint Family.
"The concept of one's problem being split among the entire fraternity within the house ensures that the burden is reduced and new solutions are found. On the flip side, it can lead to an extensive amount of gossip about anyone and everyone in the household."

Karthik compares the dramatical situations and reactions in this story to a tamil movie. The joint family with its' gossip and back-biting included reminded me of a Rajshri Production film (may be Hum Saath Saath Hain), in which most characters are very good. There are some who have a bit of negativity in them, which is resolved.

The plot is based on minor problems blown out of proportion, and the inexperienced lot doing strange, supposedly heroic stuff to solve these problems. Reminiscent of soap sagas.

Jamba The Joint Family is a story with a message. Even though there are twists in the plot that belie reasoning, the author brings home the fact that family despite all its' idiosyncrasies comes first.

In an age when families are becoming more nuclear, Karthik's family was an aberration: It was a large joint family with its own complications, contradictions and commonalities. Two love stories and a wedding get intertwined within the family at the same time. One of them could make or break the joint family, will the family survive? Will the love story succeed? Will the younger generation respond to the needs of the family? How will the older generation respond to the changing perceptions of the younger generation? Will the family eco-system survive?
In an India swamped by globalization, this racy and humorous story tries to dissect the generational changes in Indian society and how the Indian society is responding to the changes.

Sriram Balasubramanian is a Writer who has contributed extensively to international publications such as NYT, WSJ, Foreign Policy, Forbes India, and The Hindu among others. He has interacted with a variety of global business leaders and policy makers in his experience as a journalist and writer. His main area of focus has been on human development, education and socio-economic issues with a global context.
Besides this, he has a Master’s Degree from University of Southern California and is pursuing another degree at Columbia University in NYC. He is also authoring another book on the World Chess championship which was held recently.
He is very passionate about India, its cultural ethos & socio-economic evolution.
*  *  *
Book Review