#askvarsha contest
Ask Author Varsha Dixit a question on your blog and she will answer you in her own unique way. Watch out this space for more. Only the best questions will be selected.

My Question for #askvarsha is..

Hi Varsha. It's a pleasure getting to ask you this question.

"I think deep but write light!" This is how you describe yourself.

Much as I love your 'light' writing (though I have to insist that your characters have a depth to them that contrasts with the word 'light'), can we look forward to stories on serious subjects written by you? 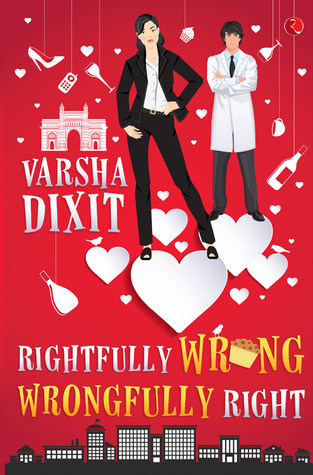 Love is in the air again…this time it’s steamy, bold and manipulative!

Gayatri and Viraj both are products of childhood trauma. Yet they were able to survive, one because of her shrewdness and the other because of his genius. Rightfully Wrong Wrongfully Right, the final part in the best selling ‘Right and Wrong’ love trilogy is the story of these two damaged souls.

Gayatri Dutta, the poster child for rich spoiled diva is fighting to escape a life of servitude her tyrant father is hell bent on pushing her into. Her past string of failures have her backed against a wall. Lonely and desperate!

Viraj is a con who uses his genius to perpetuate his isolation. His life once of violence and abuse has left him cynical and cold. He shuns the society and its hypocrisies.

And then Gayatri and Viraj cross paths. She needs him and he despises her.

To Viraj, Gayatri, is the epitome of all that he despises, shallow, manipulative and the kind who uses her beauty as a weapon. Or is she?

Gayatri sees Viraj only as a means to an end. She is sure that Viraj with his nerdy demeanor, owlish glasses and crude behavior will be easy to manipulate and walk over. Only he isn’t!

Excerpt from #RWWR
‘I can do this, I can do this, I can...’ Gayatri wound her fingers tightly around her cellphone as she made her way to the cubbyhole Viraj called his office. I did not expect a freaking hug, but a polite ‘how are you’ wouldn’t kill that man. She rapped her knuckles on the door.
Viraj swung the door open. ‘What?’ His brows were furrowed and his lips, pursed.
Gayatri remembered what Nikhil had said to her once. Dr Viraj owns and runs this lab. He was the only one you needed to impress! ‘It’s my first day here!’ Gayatri could hear her voice shake. ‘Could you tell me...’
Gayatri scuttled out of Viraj’s way as he leaned out. ‘Find an empty room, do your work there. You are free to leave any time you want. You are free to come or to not come.’ The door shut on her face.
Flabbergasted, Gayatri kept staring at the door. What just happened? She cleared her throat. I should not piss him off anymore. ‘Thank you for this…this job.’ Her voice was as uncertain as the look on her face.
Viraj tugged the door open again. Gayatri flashed a smile at him and opened her mouth to speak but he stopped her short. ‘I don’t like talking. Find a room and stay there.’ He shut the door on her again.
Asshole! Gayatri fisted her hands and retreated. I can do this! I am doing this! Bigger picture, please! Gayatri paused and peeped inside the first lab that she stumbled upon. The place was quiet except for a low hum of machines. Gayatri pushed the doors open and walked inside the lab. It was empty. ‘Does anyone else work here besides the mad scientist?’ She leaned against one of the steel racks. The door flew open behind her. With a big grin she turned to greet the person coming in. ‘Hi! I—’ she froze. It was the mad scientist with a bunch of papers in his hand.
Viraj noticed Gayatri at the same time. A familiar irritation flashed in his eyes. ‘Not this room. Not my lab! Find another room!’ He spoke with cool authority.
‘I was just looking!’ Gayatri smoothed her ponytail trying to mask her nervousness. He had her in knots.
Giving an indifferent shrug, Viraj walked past her. Gayatri got a whiff of his aftershave; it smelled clean and crisp, like water with a twist of lemon. At least he doesn’t stink like his manners! Gayatri stood there quiet and confused.
A loose paper slipped from Viraj’s hand and landed on the floor.
‘You dropped some paper!’ Gayatri said, her voice friendly.
‘Ignore it. Like you, it is not going anywhere.’ Viraj pulled a portable stool and took a seat in front of an electronic panel fixed to a bigger panel.
Gayatri gritted her teeth and grinned with the ferocity of a wild animal that could pounce any moment.
Unknown to her, Viraj gave a similar smile except his was more like the wild animal that had pounced and won.
‘I’ll go and find a room. Thank you!’ Swiveling on her heel, Gayatri headed for the door.
Something stopped her—her father’s face and the realization that two weeks ago she had physically fought for herself, and now she had to fight again but with her mind instead of hands. I have to win over Mr Madness. Maybe I could wear a beaker over my head and tattoo the periodic table on my arms!
‘If you are trying to open the door telepathically, let me be the first to tell you it is not working!’
Gayatri exhaled noisily. Scathing and sarcastic, what more could a woman ask for? Taking a few calming breaths, she slowly pivoted to face Viraj, specifically his back as he sat hunched fiddling with the panel in front of him.
‘I’m sorry if I have offended you somehow. I really need this job. And also, I’m qualified for it. I can show you my degrees. I can really make a difference here.’
Hearing Gayatri’s words and her apologetic tone, something melted inside Viraj...again. But to keep up appearances, he turned rude. ‘I’m busy!’ he barked.
‘Please Mr Viraj, give me—’ Just then, without warning, someone swung the door open. Gayatri wasn’t prepared for the push. ‘Ouch!’ She toppled. Her desperate hands grabbed the first thing in the vicinity—a steel rack. The rack shuddered violently and some of its contents landed on the floor.
‘What the hell!’ Viraj bellowed jumping to his feet.
Gayatri winced. A large electrical component had crashed into her hand ‘The door just opened, pushing me in,’ she said shaking her arm in pain.
Viraj glared at the door. He instantly lost the frown and his mouth eased at the ends. ‘Oh it’s you! Come inside!’
Huh, Hyde turns Jekyll! Gayatri spun around.
A timid, bespectacled, five-foot-nothing girl, her long hair in a tight braid, clad in a pastel-coloured salwaar kameez, stood at the door. Her skin was smooth and her hands kept tugging at the dupatta around her neck ‘Sorry to interrupt! Dr Kalra wanted to show you some tests he is about to run in lab 2.’ She then glanced at Gayatri. ‘I’m sorry if I hurt you. It was an accident.’
Gayatri was about to speak but Viraj cut her off. ‘She’s fine. Let’s go!’
Viraj went out with the girl, not even sparing a glance at Gayatri.
Astounded, Gayatri watched them leave.


Urghh…the shit-faced scientist actually smiled and that too at that girl! Gayatri kicked the steel rack. It shuddered again! Shoot! Before anything else would fall on her, Gayatri went after the scientist and the simpleton.

Did you like the excerpt? Author Varsha Dixit offers you four of her chapters free. 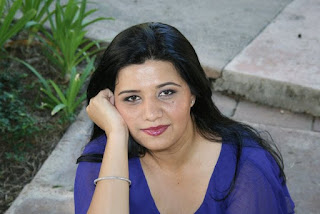 Varsha Dixit, the bestselling author of four successful contemporary romance books. Her debut book, Right Fit Wrong Shoe was a national bestseller for the year 2010. Varsha was a part of the Indian Television Industry and worked as an assistant director and online editor. She considers herself a dreamer who thinks deep but writes light. Even though creativity is gender free,Varsha feels blessed and enriched to be a woman. Currently, with her family, Varsha resides in CA, USA.

You can stalk her @

Email ThisBlogThis!Share to TwitterShare to FacebookShare to Pinterest
Labels: Books