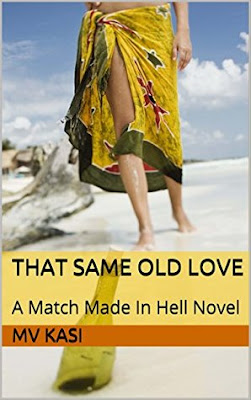 
Mahi is back in her hometown, Hyderabad, after having spent years in the USA. Having struggled through insecurities, disappointments, and pain of familial relationships, she wants to let go of her past mistakes and start over.

Samrat, who had been a victim of Mahi's selfish pranks, is now a tycoon and also her neighbour. He obviously doesn't believe that Mahi has, or can, change since he last knew her in college.

The attraction between the two is sizzling from the very beginning. As they cross paths often, it is fun to read their banter.

That Same Old Love is a story in which each of the characters, however fleeting a place they may have, has a strong presence.
The secondary plots, such as Sidhu and Ananya, or even the cursory mention of the story behind Samrat's parents leave an impact in the mind of the readers.

This is why That Same Old Love is an enjoyable read, even though the author has given it this humble title.

This book makes a point about gender inequality and domestic abuse, about the belief of sex as a taboo and the acceptance of ones' sexuality, about bullying and the insecurities of teenage, and much more. And none of this is mentioned as in-your-face preaching.
These are all a part of this well-written, passionate story of love.

As Mahi and Samrat have a shared past, That Same Old Love moves between present and the past often. The narrative moves from one time to another without losing the rhythm of this story that I would recommend to readers who love romance.

But it is not a typical 'boy meets girl, they have a couple of tiffs, then they make up and live happily ever after'.
That Same Old Love is a love story which does have youthful passion, but it is actually a mature love story of two individuals who celebrate even their differences, having known from experience that happiness does not come in any standard moulds.

A former bad girl with a past...

Mahi had hit the rock-bottom. All she wanted to do now was to start over and lead an uncomplicated drama free life in her hometown, Hyderabad. But unfortunately, some people never forgive or forget, and hold on to their grudges for a very long time.

A former nerd who hates her and wants her gone...

Samrat, a highly successful entrepreneur was Mahi's former classmate and current neighbor. Mahi had effectively ruined his higher educational prospects with her false allegations. She along with her similarly mean friends had also made his sister Ananya's life miserable during their college days. And to make matters even more complicated, Ananya is married to Mahi's first love, Sidhu, whom Mahi had callously left behind to marry a person of her parent's choice.

When Mahi and Samrat butt heads at every turn, they are caught up in a fierce, but unwanted attraction that leads them into an exciting wild fling with no strings attached.
But what would happen when one of them is no longer happy with their arrangement, and begins to demand more, wanting everything...

A humorous, heartwarming, sexy story of redemption, friendship and love.

When I am not working in a full-time job or taking care of my family, I sneakily read at least 3 or 4 romance books of all possible genres within a week. I love reading books that are witty, humorous, heartwarming, hot and definitely with a happily-ever-after.

After sinking my teeth into hundreds of books over the years, I had an aha moment one day and started writing my first romance book. For three months straight I worked day and night until finally, I finished it. Then of course, I re-read what I wrote, cringed and deleted most of it and started over again. Finally, I had a version of it ready that I was satisfied with (somewhat). But after getting positive feedback from well-meaning friends and family members, I decided to self-publish it on Amazon.

Although my story takes place in India, featuring Indian characters, I'm hoping that it can be enjoyed by readers all around the world. Especially since romance has no boundaries when it comes to a sizzling one featuring a sassy heroine and a hot alpha hero.