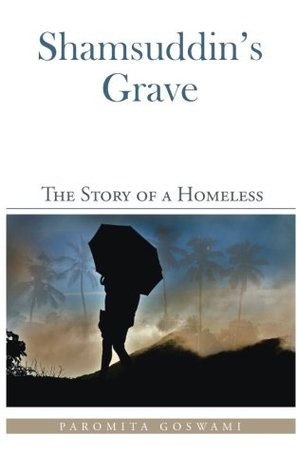 With Shamsuddin's Grave, author Paromita Goswami has weaved an emotional story of struggle, in the backdrop of social ostracism in India, and the plight of supposed illegal refugees who have come from Bangladesh to India.

Latika and Snehlata are two gentle souls who are example of those who rise above the discriminations and unjustice of the society.
Snehlata has provided living quarters for Shamsuddin for years.
Latika is back to her hometown, Guwahati after having known the fast life of a metro city.

The story of a simple man, Samsuddin. He leaves his village, works hard, lives through difficult times, feels guilty if he is not faithful to his wife. He does it all to make a good life for his family.
Things do not turn out as he expects them to.
Shattered and disappointed, Shamsuddin still holds on to hope.

Shamsuddin's Grave's pace is a little slow in places. But I think it serves the important purpose of giving details of the place and its' culture.

The story of Shamsuddin's Grave is a multi-layered one. Besides the main characters, there are many other that leave an impact.

There is Monidi and her lonely life because her children are settled abroad.
Her thoughts on this subject are worth quoting-
"They are ready to struggle and start from scratch in a new city rather than cherish with what they have known in a place. They are least interested in preserving the legacy and will turn up as a struggler just like their forefather. But it will not end there. Their children will also follow their parents' steps in near future and leave them to fend alsone in their old age. So ultimately, you see, the family will have no roots, no legacy... we have taken great pains in preserving our culture and roots. But todays generation... for them their career is everything and they even don't mind being rootless."

There is hope though, as Snehlata's words about the younger generation explain-
"Things are changing Shamsuddin. Today's generation does not think like us. They have more exposure than us and have better thinking. Our generation bore the bruise of hatred and that too not once but twice. So our generation thinks like that but I am glad that the future is bright for all of us."

The author has written characters who touch your heart as you relate to their emotions.

Each one has their own story to tell. Paromita Goswami makes a strong statement about the society through this book and makes you ponder over the many wrongs which we are so used to that we take them in our stride.

Shamsuddin's Grave touches on many social problems, but does not preach about them. At least, not too obviously.

The ending of Shamsuddin's Grave was a surprise. It made me smile (a little sadly), even as it sent a chill down my spine.
Does luck favour the ones who already have luck on their side, I wonder...

Latika's wrecked personal front leaves her completely shattered. So when her ailing father reveals his desire to go back home, she doesn't think twice and moves to her hometown. She joins an NGO and comes across a teenager rape victim. Much against her TL, Debjyoti's wish she sets out to trace the girl with Shamsuddin's help. Will she succeed or end up in big trouble?

Shamsuddin, a daily labourer, somehow manages to thrive in the city. Meanwhile, flood devastates his house in the village. His family takes refuge in a relative's place where his wife has a tough time resisting to the advances of her brother-in-law. Can Shamsuddin arrange for an accommodation before it is too late?

Set in Guwahati amid the backdrop of flood and ethnic turmoil, "Shamsuddin's Grave", is the story of migration towards big cities for a better life.

Check out the book trailer: 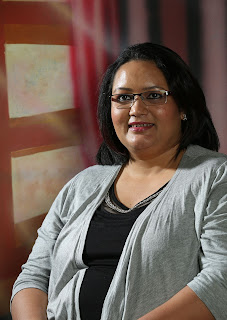 A nomad at heart and a rebel by choice is the best way to describe her. Paromita Goswami had always believed in making her own path. She says life is full of stories that are waiting to be told.

Author of Shamsuddin’s Grave, published in 2015, an offbeat social drama based on critical social issue, Paromita Goswami loves to write about life and relationships. She has written many short stories for online magazines. Her upcoming works are, Grow Up Messy, is a humorous collection of short stories of a mischievous five year old girl. The book is a ride down the childhood days.  It was part of blogging challenge, #atozchallenge2016 and second is The Jungle Series, a collection of short stories #paranormal, based on the jungles of Chhattisgarh.

Paromita is married and lives in Raipur with her family including her pet cat and dogs.  She loves to connect with her readers and can be easily traced on all social media sites.