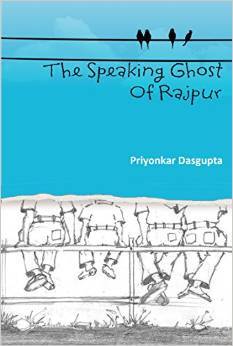 Shoumo and his brother Shomik are visiting their Cousin Joy a small town - Rajpur.
The Speaking Ghost of Rajpur is the story of experiences and adventures of these three and their friends.

As I read the blurb of Priyonkar Dasgupta's The Speaking Ghost of Rajpur, I thought of Malgudi days and The Five Find-Outers.

A picturesque small town in India and the experiences of young boys... how could I not think of Malgudi days.
And when there is a mystery involved that these young boys are solving in their summer vacations, I think of The Five Find-Outers - my favourite series by Enid Blyton. I missed the girls and the dog, though :)

Written in first person narrative of 13-year-old Shoumo, the story is written in a conversational tone. It's as if the narrator is telling the story to his friends, reminiscing the good old days, telling the little details to make the narration interesting, and at times, it seems, adding just a little spice to the actual story.

Our narrator is thirteen. Even telling this much is like giving away a spoiler. The author keeps you guessing. You, as a reader, look for clues of your own trying to figure out the age of the boys in the book.

A very interesting thing about the way this book is told is that the protagonist himself is on the sidelines of the main plot when the story starts. He is younger than the rest of the kids, so we discover things with him. It is not like he knows it all and is telling us about it in bits and parts.

The Speaking Ghost of Rajpur progresses at an unhurried pace, just as life, or at least a vacation, in a small town would be. Taking pleasure in every experience.
Set in the year 1994, it is about a time when video games had crept into our lives but were not easily accessible.

It is the emotions in the story that run strong. Our narrator is younger to the other kids, comparatively naive, tagging along with the older lot.

The author's description of Rajpur had me smiling.
From the perspective of this young boy, this industrial town is as charming and interesting as any holiday destination can be.
"One by one I had gradually built up a little image about the place in my mind, and probably because of that what I saw and felt around me made all the difference... The earth was clayey, often bare and rough, the roads seemed strangely empty for a twelve 'o' clock noon; the walled compounds, the little houses... everything had their own special meaning, especially for me, and I looked at them with a wanton air of happiness..."

It is this style of expressing fascination with the routine that makes this book a good read.

The small town charm that I can so relate to, having spent some of my vacations in school days with my cousins in nonmetro cities. Alas, I have no such adventures to narrate, but I understand when the narrator says -
"Life at aunt's place was great: good food, little routine and complete freedom without restraints and reservations. What more could one hope for?"

I loved the way Aunt Purba is described by the author. It is like I know her, or someone like her.
"... a lady of few words and even fewer opinions. She was the kind just happy to have her family and people around. Whether we were late or early, our conduct justified or not, mattered little; it was enough that we existed, and that we were happy."


In the words of The Speaking Ghost of Rajpur, or rather in the words of our 13-year-old narrator, is the conviction of the importance of every encounter. A conviction that the matured point of view of grown-ups usually smears.

As the story starts, the narrator is a little lost, often feeling out of place, struggling to fit in.
From that point of view, it can even be looked upon as a coming of age story.

This is not a 'Once upon a time' kind of straightforward story. It goes back and forth in time, it lingers on certain experiences and suddenly goes fast-paced in other situations.

The Speaking Ghost of Rajpur is about finding joy in simple things.
It is about the care-a-damn bravery of youth.
And it is about reminisces of a time when doing nothing was a pleasure.