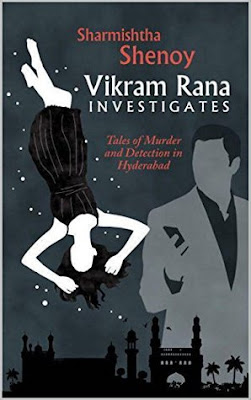 Vikram Rana, an ex-cop is now a private detective. Through Sharmishtha Shenoy's Vikram Rana Investigates, as he solves his first case and then another, we get to know this principled man and get familiar with his life.
The two episodes, The Mysterious Affair at the Lohia Mansion and The Sonia Sinha Case are both murder mysteries.

Episode 1: The Mysterious Affair at the Lohia Mansion

Vikram Rana is finally working on his first case.

The filthy rich Lohia family with its' many secrets make for interesting unraveling through the story and keeps you guessing about the real motives of each one of them.
The family politics of Lohias does remind one of a famous, rich family of India.

Set in Hyderabad, Vikram Rana Investigates is a good mystery where you, as a reader, may suspect many, but can not really guess who is the culprit.

Another murder mystery, The Sonia Sinha Case has a different feel to it compared to the previous one.
There is no childhood friend around to pave the way, although the Inspector is still around.
Since it is not even known who Sonia Sinha is when the case starts, and to getting to unravel the confusion around many possible killers, this one is a moves swiftly.


In both the cases, Vikram is working alongside the police. His being an ex-cop, this does can sense from the story point of view, but when a private investigator works in competition with the authorities, it does add an edge.

Food plays an important role. What is eaten and where is, after all, an integral part of Vikram Rana's life as he is clearly a foodie.

On the other hand, when a vegan talks about ordering a pizza, you do wonder what is going on. By the way, Vikram is not the vegan in this book.

His wife, Veena with a corporate job, is quite his opposite in many ways.
The relationship of these two does provide a jollity at times, but as you get more familiar you do end up wondering about the strength and honesty of the relationship.

I did not understand, or relate to, the flip-flops in their relationship.

One thought that I had after reading this book, that surprised even me, was that I would have liked this story more had it had some strong, positive female characters.
There are interesting female characters, but they are either manipulative, or negative, or just plain meek and insensible.
Did I think this because the author of this book is a female, is a question I have asked myself.
And it is not as if I go around searching for such female characters in the books I read, or that it is a criterion for how much I like a book.

I think I would love to read a sequel to this one with Vikram Rana investigating other cases, with some favorable female characters playing an important role in the story.

Vikram Rana Investigates (both episodes) make for a good read because the murder mysteries are interesting. The setting of the mysteries, Hyderabad is woven into the story with getting frequent mentions.

All in all, Vikram Rana Investigates is a good, easy read for lovers of Mystery. But I would have loved if a few details, including the relationships, had been more finely defined.

The Mysterious Affair of the Lohia Mansion

When the glamourous socialite Richa Lohia is poisoned in her mansion in Jubilee Hills, her brother-in-law hires his mate, ex-cop Vikram Rana, to solve this murder. This is Vikram’s first case and he, along with Inspector Gopi Reddy, must solve the case even if they face opposition from the richest and powerful family in Hyderabad, who would stop at nothing to defend themselves.

When property developer Krishna Dhavala is stabbed to death in Necklace Road, everyone suspects Mrs. Dhavala to be the murderer of her alcoholic and abusive husband. But is that really the case? Vikram Rana and Inspector Reddy have a tough time uncovering the murderer and Vikram himself almost dies trying to solve this case. Experience the mystery along with the duo as they fight their way through the maze of lies, deceit and greed.

ABOUT THE AUTHOR - SHARMISHTHA SHENOY Sharmishtha Shenoy loves writing murder mysteries, the kind of books that she herself likes to read. Her favorite authors are Sir Arthur Conan Doyle and Agatha Christie. She also likes the work of Satyajit Ray – especially the Feluda Series. She was born in Calcutta and has done her post-graduation from University of Reading, Great Britain. She lives in Hyderabad.