Pattern of our choosing - Count Your Blessings #2

There was once a man who would design new patterns of embroidery every day. He loved his job.
A colleague of his would embroider the same designs over and over again day after day.
The man pitied his colleague's monotonous job.

Before leaving for a week-long vacation, he convinced the boss to let the colleague take over his work for the week. The man thought he was doing his colleague a favour.
He returned from the vacation to some beautiful designs by a close-to-breakdown colleague.

Just as designing something new worked for the man, it was the repetitive task that his colleague was comfortable doing.

"Monotony is good"
I have repeated these words often over the last few years.

A couple of years of frequent traveling, followed by shifting house too often, and finally, a major problem in the family. For a while, it seemed that everything 'normal' I loved would be disturbed.

The unadventurous lull after all of this, and I felt thankful, which is where 'monotony is good' came in.
Every time I would feel bored, I would recite them.

This became my version of 'No news is good news'. Status quo means nothing has gone wrong.

Some of us relish adventure, others want the comfort of routines. And most of like a mixture of the two, in varying proportions.

I know people who can't stay at home through a single day. And many others who need time-off at home to get over the stress of a vacation.

The blessing is to have the life that suits your temperament. 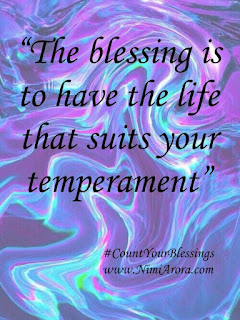 Count Your Blessings #1 - Luxury to mourn 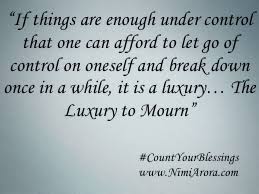