Beds of All Kinds - Stories from an ICU waiting room #AtoZChallenge

April 02, 2020
For just about 3-4 hours at night was there an eerie silence in the ICU waiting hall, when almost everyone was sleeping there.

Past the grand glass doors of the entrance was the huge reception desk and past that the waiting hall.
Rows of 3-seater aluminum chairs ran the whole length of the huge hall. Two rows with their backs to the walls on right and left with a row facing each of these rows. Each of the latter rows had its back against another row.
A total of eight rows - two facing each other and then two with their backs against the other.

A long hall. Why did I never count how many chairs there were? I spent hours sitting there doing nothing. You see, you don't observe, I am thinking now, imagining that Sherlock is saying it to me. I think there were about 8-10 three-seater chairs in each row. And at the end of the hall, one row perpendicular to these.

On the right at the extreme end of this hall was a doorway with no door. It was not visible until one was almost there.
Inside was another hall - the same length, a little less wide. This one had recliner chairs - the comfortable kind.
They were supposed to be comfortable, that is, but overuse had made them less so.

These were the beds for the family of the ICU patients. Each chair had a number corresponding to a bed in the ICU.
It was supposed to be one person for each patient, sleeping in the allocated recliner.
If only just one person would stay, if only the recliner was comfortable, if only people followed rules, if only the rules were practical.
No one really told the rules to the newcomers either. It was just a mouth. The veterans would dole out the to-do and not-to-do lists.

So, some slept on these recliners, others made beds on the aluminum 3-seaters, and a few slept on the floor, against the wall opposite the entrance in the recliner-hall. It wasn't allowed to sleep on the floor in the first hall.

In the inner hall, there was just enough space between the last row of recliners and the wall for a person to be able to lie down, but then one had to leave space for others to walk by, so it was a tight uncomfortable squeeze.
Only the older people chose to sleep there because they needed to have their back straight while sleeping and the recliners would only recline halfway.

One night the guards chose to (or had to) insist on no one sleeping on the floor anywhere in those halls.

She was there with her daughter. Her daughter's husband was in the ICU.
She pleaded. She cried. She said she couldn't sleep on the sofa (recliner), her back hurt. She said she would sleep right against the wall. She said she didn't move through the night, see there was enough space for people to walk by.

The guard looked a little uncomfortable. He told her to sit on a recliner for a half-hour. He said the bosses were looking at the CCTV live footage. He told her that she could sleep on the floor after that.

Each night from then on, she would wait till everyone slept before moving to the floor and make it a point to be up before the crack of dawn.

Previous: Announcements at the Appointed Hour 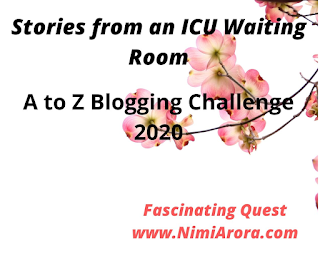